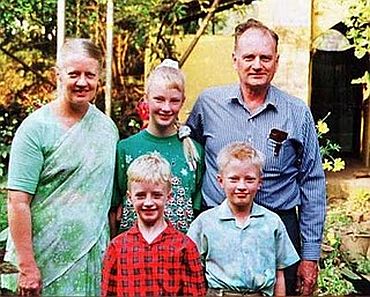 Missionary Graham Staines with his family
Supriya Sule, NCP MP, attacks BJP MP Satya Pal Singh, during a discussion on Foreign Contribution (Regulation) Amendment Bill. "As a retired police officer from Maharashtra, what example did he (BJP MP Satya Pal Singh) give? That one NGO did not do good work. If he was the Police Commissioner what action did he take?"
Satya Pal Singh said earlier that in the Graham Staines case, the NGO was converting people to Christianity. "There was uproar over Graham Staines. What happened to him and his two children was wrong. But CBI, Odisha Crime Branch and the Justice DP Wadhwa Commission probe concluded that tribals were being converted there. It was the biggest reason that people turned against him," Singh said.
Sule said, "Like there may be one NGO doing bad work, there are thousands of NGOs doing very good work. He has defended a case in Odisha about a family that was burnt alive. Whatever they did, no law anywhere in the world allows you to burn people and their children.
"What's even more shameful that somebody who was in police, just because he's in an organisation, says CBI said it (that tribals were upset with Staines). Does that mean CBI says it's okay to burn somebody's children because of actions of parents?"
SP Singh said earlier while discussing the bill, "We know what happened in northeast, how things changed there in last 50 years and a particular religion rose. There's government and intelligence report on how insurgency increased there with money under FCRA."
Graham Staines was an Australian Christian missionary, who along with his two sons, Philip (10) and Timothy (6), was burnt to death by members of the Bajrang Dal, in 1999. In 2003, Bajrang Dal activist Dara Singh was convicted of leading the murderers and was sentenced to life in prison.
« Back to LIVE

Congress veteran Amarinder Singh on Saturday resigned as chief minister of Punjab, capping months of a power tussle that had polarised the ruling party in the state headed for elections in just about four months.

"I am very excited about joining the TMC. I will work for the development of Bengal," he said.

The Indian Premier League (IPL) 2021 is all set to resume on Sunday with Mumbai Indians (MI) and Chennai Super Kings (CSK) locking horns against each other.

The 79-year-old widely respected and popular leader steered the Congress in 2017 to a landslide victory in the 117-member assembly to occupy the chief minister's post for the second time.