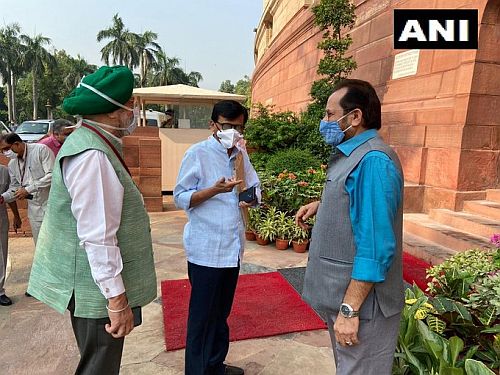 On the third day of the ongoing Monsoon Session of Parliament, Congress Rajya Sabha MP Anand Sharma has given a short duration discussion notice in Rajya Sabha over 'the incursion of the Chinese army across the Line of Actual Control and military standoff between the armies of the two countries on the LAC'.
Defence Minister Rajnath Singh will give a statement in Rajya Sabha on Wednesday over the developments along the Line of Actual Control (LAC). A day earlier, he gave the statement in Lok Sabha over the same subject.
The Opposition has been demanding a discussion on the issue. Congress also walked out from Lok Sabha over the matter.In his statement, Singh said India has conveyed to China that its attempt to unilaterally alter the status quo along the Line of Actual Control (LAC) was unacceptable and noted that the Chinese actions reflect a "disregard" of various bilateral agreements between the two countries. -- PTI
Image: Shiv Sena MP Sanjay Raut and Union Ministers Hardeep Singh Puri and Mukhtar Abbas Naqvi arrive at the Parliament, as proceedings of the Rajya Sabha begin.
« Back to LIVE