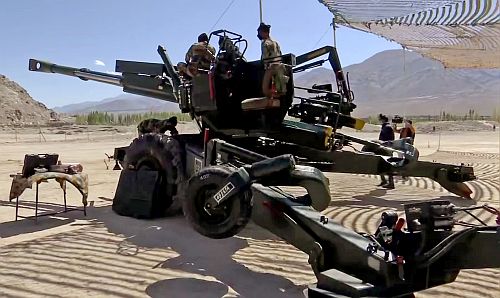 Amid the ongoing tensions over transgressions by the Chinese in Eastern Ladakh, the Indian Army is keeping its formidable Bofors howitzers ready for operations. In a visit to the maintenance facilities for the Bofors guns in Ladakh, ANI could see the effort with which the engineers of the force are servicing and maintaining the 155mm Bofors gun in Ladakh.
The Bofors gun, which was inducted into the regiment of artillery in the mid-1980s, is capable of firing both in low and high angles will be deployed in Ladakh once they will be serviced.
In Ladakh, Army Engineers were seen servicing one such Bofors gun which they said that it will be ready to roar in a few days.
According to the officials, the gun required periodical servicing and maintenance to keep roaring for which technicians have been deployed to keep it in working.
Bofors was instrumental in winning many battles of Operation Vijay was displayed in Dras in Jammu and Kashmir recently.In the workshop, Army Engineers are responsible to maintain and service all such weaponry required in odd situations.
"From a firing pin to engine assembly of a tank, Technical store groups job is to provide everything. This vehicle behind is mobile spares van, through this we provide components in the forward areas to repair technicians," Lt Colonel Preeti Kanwar said while briefing about Army's preparation in regards to servicing and maintenance in the forward areas. -- ANI
« Back to LIVE