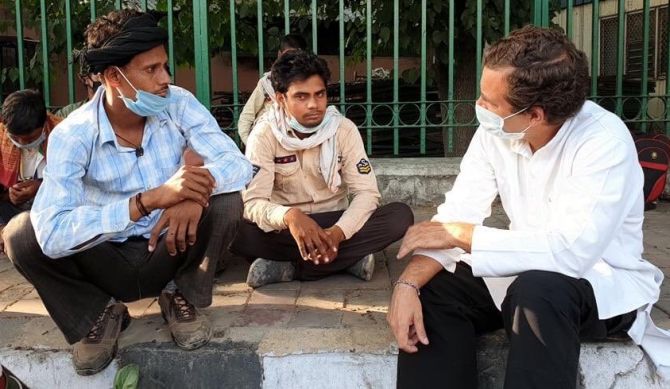 Rahul Gandhi was the only MP to meet migrants
"Did no migrant workers die during the Covid-19 induced lockdown phase if the Centre does not have any record of the same," said Congress leader Rahul Gandhi on Tuesday targeting the Central government. The Wayanad MP launched an attack on the Centre following a written reply by the Ministry of Labour and Employment on Monday, in which it had said that the government has "no such data available" on the number of migrant deaths or the job losses.
"The Modi government does not know how many migrant workers died and how many jobs were lost during the lockdown. If you didn't count did the deaths not occur? The pain is in the fact that it had no effect on the government, the world saw their deaths, it's only the Modi government which didn't get the news," the Congress leader tweeted (roughly translated from Hindi).
The monsoon session of Parliament began on Monday and is slated to conclude on October 1 without any day off. Both the Houses of Parliament will sit for four hours daily adhering to precautionary measures against COVID-19. -- ANI
« Back to LIVE

The bench issued notice to the Centre and said it would hear the matter on Friday.

The uncertainty created by the jump in COVID-19 infections and localised lockdowns prompted RBI Governor Shaktikanta Das and other members of the rating setting panel MPC to unanimously vote for status quo in interest rates and an...

'Across the country Sikhs are mourning'

'Hate and violence are an ever-present threat to us.' 'The community is staying vigilant of their surroundings.'

After this, no further political meetings of the prime minister are scheduled in West Bengal, thus effectively ending his campaign in the state as of now.

The Bombay high court on Thursday asked the Union government to reconsider its stand that door-to-door Covid-19 vaccination was not feasible, saying it must consider the plight of old people and the disabled.