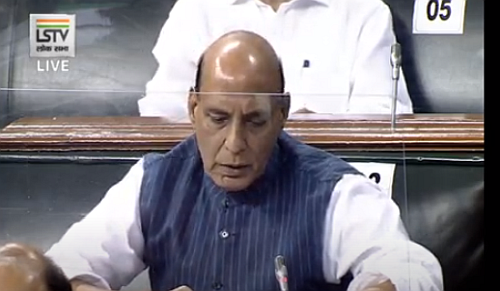 Update: Defence Minister Rajnath Singh, in Lok Sabha, on the standoff with China. "The Chinese side created a violent face-off on June 15th at Galwan. Our brave soldiers laid down their lives and also inflicted costs including casualties on the Chinese side.
"In past too,we've had situations of prolonged stand-offs in border areas with China which were resolved peacefully. Even though situation this year is very different both in terms of scale of troops involved and number of friction points, we remain committed to peaceful resolution.
"China continues to be in illegal occupation of approximately 38,000 sq. kms in Ladakh. In addition, under the so-called Sino-Pakistan 'Boundary Agreement' of 1963, Pakistan illegally ceded 5,180 sq. km. of Indian territory in Pakistan Occupied Kashmir to China.
"Troops are accordingly being provisioned with suitable clothing, habitat and required defence wherewithal. They are capable of serving at forbidding altitudes with scarce oxygen and in extremely cold temperatures, something that they've done over last many years on Siachen and Kargil."
« Back to LIVE

The television rights in the UK for England's tour of India remain undecided with just a week left for the opening Test match in Chennai from February 5.

A farmers' protest against three farm laws of the Centre, which was continuing on a national highway in Uttar Pradesh's Baghpat district since December 19 last year, has come to an end with the protesters alleging use of force by police.

Is something bothering Alia?

Can England repeat their 2012 Test series triumph in India?

He was among the key plotters of England's historic 2012 Test triumph in India and former coach Andy Flower sees no reason why an encore is not possible this year as he believes the visitors have enough 'formidable players' to challenge...

'The events of 2020 have actually put our relationship under exceptional stress.' What External Affairs Minister Dr Subrahmanyam Jaishankar told the All India Conference of China Studies on Thursday, January 28, 2021.