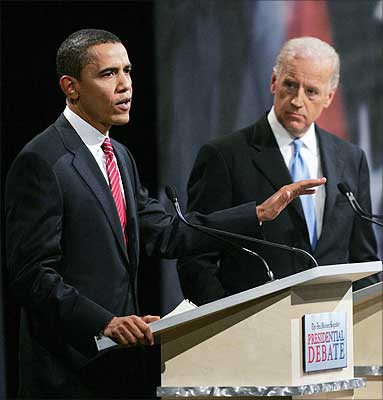 Former United States president Barack Obama will campaign for Democratic party presidential candidate Joe Biden in Pennsylvania next week, the Biden campaign has said.
President Donald Trump, however, told his supporters here that Obama was an "ineffective" campaigner and this was good news for him as in 2016 "they did a lousy job and that's why I'm your president".
Biden, 77, was the vice president during Obama's two terms. While Obama has endorsed Biden and his running mate and India-origin Senator Kamala Harris by making online campaigns for them, this would be the first time that the 59-year-old former president would be campaigning in person.
Four years after he left the presidency, Obama because of his oratory skills, still remains the biggest crowd puller for the opposition Democratic party.
"On Wednesday, October 21, (former) president Obama will travel to Philadelphia, Pennsylvania, to campaign on behalf of Joe Biden and Kamala Harris," the Biden campaign said in a statement on Friday afternoon.
No other details were immediately available.
Biden, as per the latest opinion polls, leads against Republican incumbent President Donald Trump by over nine points on an average.
However, there are signs that the polls are tightening, especially after Trump resumed his rallies after recovering from COVID-19.
He has been attracting thousands of supporters to his election rallies in the battleground states.
Presdient Trump said, "Well he campaigned harder than Hillary last time, so why do we care? The other thing he refused to endorse Joe. He knows what's going on up here with Joe. Obama refused to endorse him and even after Joe had won he didn't want to and then finally like a long time later he finally came out and endorsed him."
"But they called me they said, you know, Obama is going to start campaigning? I said, is that good or bad? I think it's a good thing because you know, they did a lousy job and I wouldn't be president of the United States if they did a good job. I probably wouldn't have run and if I did I probably wouldn't have won. It's one of those things. They did a lousy job and that's why I'm your president," he said.
Obama is the only Democratic leader who can attract a big crowd in his election rallies.
His jumping into the campaign, with a little over a fortnight left for the presidential elections, is likely to motivate and encourage Black Americans and fence sitters to come out and vote, Biden strategists believe.
A day earlier, the Democratic National Committee released a new ad featuring Obama -- The 2020 Election Is Already Here.
It highlights the stakes of this election, the importance of Americans voting now to make their voices heard and how they can find all the information they need to make their plan to vote. -- PTI
« Back to LIVE