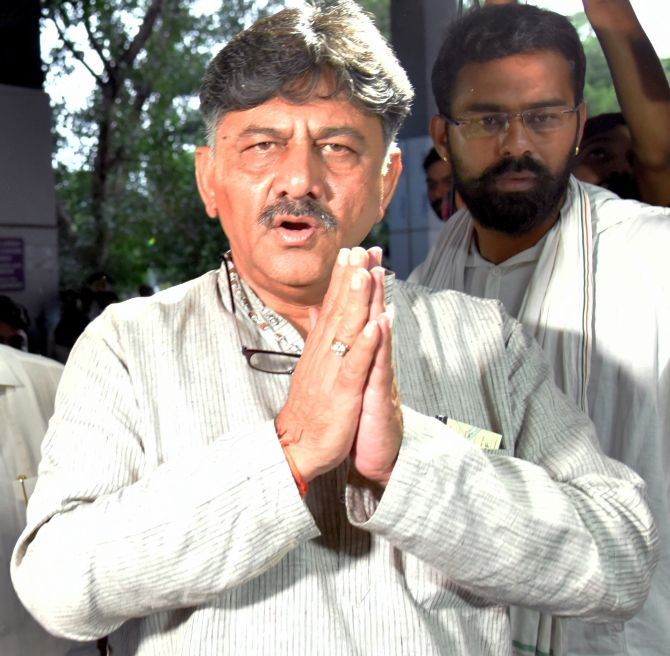 Congress Karnataka unit president D K Shivakumar on Saturday said he has received summons from the Central Bureau of Investigation in connection with a disproportionate assets case, and he will be appearing before the investigating agency on November 25.
"It is true that the CBI has issued summons, on November 19. CBI officers had come to my house to issue summons, but we were not here as we were attending a personal event. Next day morning when I came home, they issued me summons," Shivakumar said.
Speaking to reporters in Bengaluru, he said CBI has asked him to appear on November 23 at around 4 pm, but it will not be possible on that day as he along with Congress legislature party leader Siddaramaiah will be touring Maski and Basavakalyana assembly constituencies, where bypolls are likely to be announced soon.
"From tomorrow I will be touring Hospete (Ballari), Maski (Raichur), Basavakalyana (Bidar). I will be back on November 25. I have officially communicated that I can appear in the afternoon that day and have also spoken to CBI officials over phone and they have agreed to it," he added.
On November 19, Shivakumars daughter Aishwarya had got engaged to senior Bharatiya Janata Party leader S M Krishna's grandson and the late Cafe Coffee Day founder V G Siddhartha's son Amartya.
CBI on October 5 had conducted searches at 14 locations, including in Karnataka, Delhi and Mumbai at the premises linked to Shivakumar and others.
The investigating agency had said searches have led to recovery of Rs 57 lakh cash and several documents, including property documents, bank related information, computer hard disk etc, and the investigation is continuing.
The CBI had also registered a case against Shivakumar and his family members on the allegations of possession of disproportionate assets worth Rs 74.93 crore.  -- PTI
« Back to LIVE