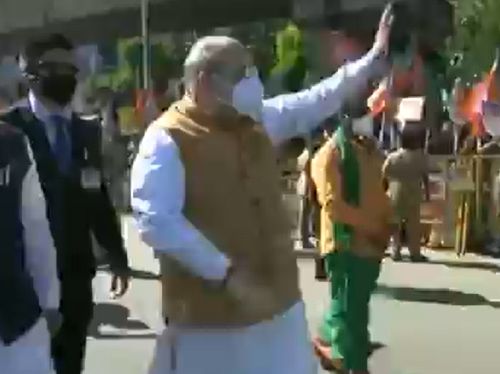 Union Home Minister Amit Shah on Saturday sprang a surprise here when he virtually broke protocol to get out of his vehicle and walk on the busy GST Road outside the airport to greet supporters, minutes after he landed in  Chennai for a two-day visit of the city.
Shah, who thanked the metropolis for its love, said it was 'great' to be in Tamil Nadu.
Shah is slated to attend a Tamil Nadu government event later in the day, where he will inaugurate and lay the foundation stone for projects worth over Rs 67,000 crore, including phase II of Chennai Metrol Rail.
Soon after his arrival from Delhi, Shah was received by Tamil Nadu Chief Minister K Palaniswami, his deputy O Panneerselvam, senior cabinet members and Bharatiya Janata Party state president L Murugan among others, before proceeding to the city hotel where he will be put up.
However, after exiting the airport, Shah's car suddenly stopped and the BJP veteran got out, before walking a short distance, waving at scores of BJP and All India Anna Dravida Munnetra Kazhagam workers who had gathered to receive him with their respective party flags.
Accompanied by BJP national general secretary and party in-charge of poll-bound Tamil Nadu, C T Ravi, and Murugan, with his security detail in tow, the home minister warmly waved at the overjoyed supporters who had thronged the airport since the morning.
A heavy security cover has been provided in the city following Shah's visit, during which he will meet state BJP functionaries and possibly discuss Tamil Nadu elections, due next April-May, before leaving on Sunday morning.
Meanwhile, Shah took to Twitter to thank the city for its love and support.
'It is always great to be in Tamil Nadu. Thank you Chennai for this love and support,' he said in a tweet accompanying a video clip of his walk on GST Road.
Shad had earlier been in Chennai in Augsut 2019 to release a book on vice president M Venkaiah Naidu's two years in office then.   -- PTI
« Back to LIVE