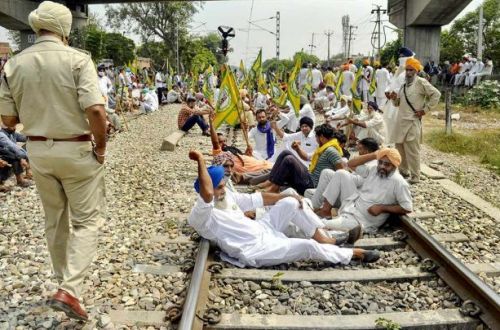 Different farmers' organisations in Punjab, protesting the three Central farm laws, on Saturday announced to lift their rail blockade for passenger trains from November 23.
The decision to allow passenger trains in the state came after a meeting of representatives of farmer leaders with Chief Minister Amarinder Singh who had invited them for talks in Chandigarh.
'Punjab farmers to completely lift their rail blockade from Monday (November 23) to allow all goods and passenger trains, in response to impassioned appeal by the chief minister at a meeting with Kisan Unions,' tweeted Raveen Thukral, media advisor to the Punjab chief minister.
Before meeting the chief minister, farmers' organisations held their own meeting to deliberate the rail blockade issue.
The farmers' organisation, that had resorted to 'rail roko' agitation from September 24 over the farm laws, had already agreed to allow goods trains to run in the state, besides clearing rail tracks and vacating platforms.
But the deadlock between the protesting farmers and the Railways continued over resumption of trains.
The farmers' bodies had maintained that they would consider allowing passenger trains to run in the state if the Centre starts running goods trains first.
However, the Railways had refused to resume goods trains, saying it would either operate both freight and passenger trains or none.
The Railways has maintained that it needs full guarantee from the state government that no trains will be disrupted and both passenger and freight trains would be allowed to operate.
The farmers' bodies were also under pressure from the industries which have seen a loss of about Rs 30,000 crore because of suspension of goods trains in the state.
Halting of goods trains has also hit the supplies of fertilizers for the agriculture sector, coal for thermal power plants and supply of gunny bags for paddy procurement.   -- PTI
« Back to LIVE