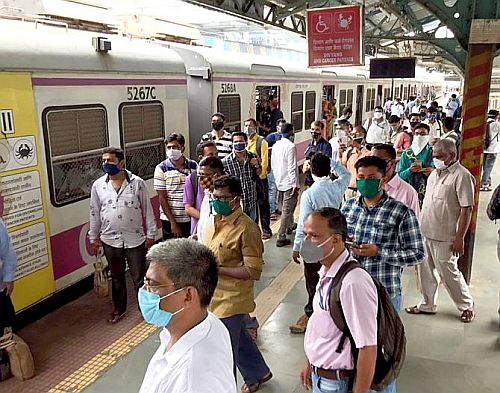 In a bid to prevent crowding in local trains in Mumbai, railway authorities added 753 new special services from Monday, taking the total number of services on the suburban network to 2,773, officials said. With this, the railway authorities have resumed 88 per cent of the total 3,141 suburban services which were being operated before the outbreak of COVID-19, they said.
During normal times before the lockdown, the Central Railway used to operate 1,772 services, while the Western Railway ran 1,367 services on the suburban network, they said. The local trains, considered, as the lifeline of Mumbai, were resumed for the emergency and essential services staff in June this year.
To cater to the increasing crowd in suburban trains, the Central Railway has now added 552 more services on its routes, while the Western Railway has added 201 services, as per a joint press release issued by the CR and WR on Sunday.
With this, the special suburban services on the CR routes have increased to 1,572 from the earlier 1,020, while the WR services have gone up to 1,201 from 1,000. Earlier, the Railways had decided to run 610 additional special suburban services from Sunday to avoid crowding in trains. -- PTI
« Back to LIVE

The SKM also gave a call for observing a nationwide 'Day of Betrayal' on January 31 against what it called the government's reneging on its assurances to the farmers on their demands, including legal guarantee of minimum support price...