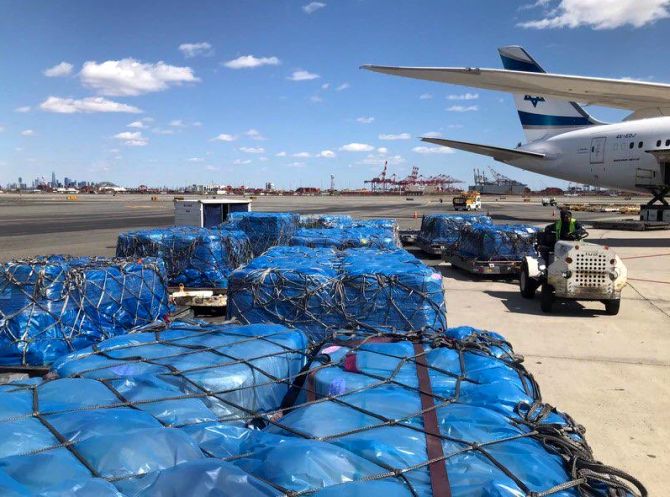 A HCQ consignment from India reaches US
India has stepped up as a leader in the fight against coronavirus, an influential American lawmaker has said, applauding New Delhi for providing the US with vital supplies such as mass quantities of anti-malarial drug hydroxychloroquine.
"The Republic of India is one of America's closest and most important allies, and our relationship has always enjoyed bipartisan support in Washington... I am thankful that India has stepped up as a leader in the fight against coronavirus, and am glad that our special partnership remains strong during this pandemic," congressman George Holding, the co-chair of the Congressional Caucus on India and Indian-Americans, said.
In a statement, the influential Republican lawmaker from North Carolina also appreciated the role being played by Indian-American non-profit organisations and community organizations in the pandemic relied work in the US.
"On the US soil, Sewa International (an India-based service organisation) has been working tirelessly to donate masks, provide meals to first responders, and ensure vulnerable populations have access to food and medicine throughout the country," Holding said.
Sewa has also provided support systems by hosting informative conference calls, while Indo-American hoteliers have stepped up and donated temporary housing to Indian international students in the United States, he added.
Holding said the Indian government has been hard at work both in their country and in the United States to help the international community fight COVID-19. "It's amazing to see how one of our closest and most important partners can have such an impact in our country from nearly ten thousand miles away," he said.
Together, the Indian and US governments have been able to identify measures necessary to propel us forward in the fight against this pandemic, Holding said.
« Back to LIVE