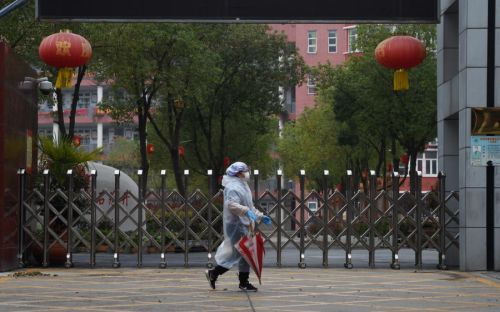 Extending school and workplace closures till April, rather than March in the epicentre of the COVID-19 pandemic, the Chinese city of Wuhan, can likely delay a second wave of cases until later in the year, relieving pressure on health services, according to a new study.
The research, published in The Lancet Public Health journal, says the closure of schools and workplaces in Wuhan have reduced the number of COVID-19 cases and substantially delayed the epidemic peak -- giving the health system the time and opportunity to expand and respond.
In the study, researchers, including those from the London School of Hygiene & Tropical Medicine in the UK, used mathematical modelling to estimate that by lifting these control measures in March, a second wave of cases may occur in late August.
However, they said, maintaining these restrictions until April, may delay a second peak until October, relieving pressure on the health services in the intervening months.
The scientists also said given the large uncertainties around how many people an individual with the virus is likely to infect, and how long a person is infected on average, the true impact of relaxing physical distancing measures on the ongoing COVID-19 epidemic cannot be precisely predicted.
"The unprecedented measures the city of Wuhan has put in place to reduce social contacts in school and the workplace have helped to control the outbreak", said Kiesha Prem from the London School of Hygiene & Tropical Medicine, who led the research.  "However, the city now needs to be really careful to avoid prematurely lifting physical distancing measures, because that could lead to an earlier secondary peak in cases. But if they relax the restrictions gradually, this is likely to both delay and flatten the peak," Prem said. -- PTI
« Back to LIVE