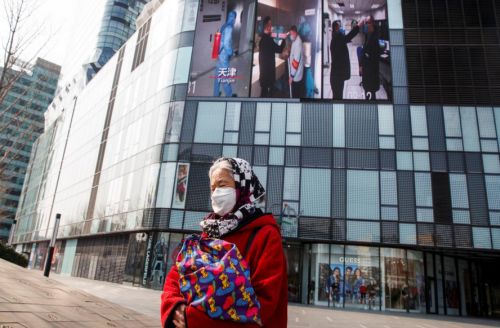 China has reported no new local coronavirus infections for the second consecutive day, but the number of imported COVID-19 cases sharply rose to 67 in a day after the deadly virus was brought under control in its epicentre Wuhan, health officials said on Thursday.
China's National Health Commission (NHC) said on Thursday, while no new domestically transmitted cases of coronavirus were reported on the Chinese mainland on Wednesday, 67 new confirmed cases were recorded, up from 47 a day earlier, all of which were imported.
Also, although epicentres Hubei province and its capital Wuhan have been reporting zero cases for a while, death toll there continued to rise. On Wednesday, six deaths were reported from Hubei province taking the death toll in China to 3,287 people and total number of cases to 81,285.
In Hubei and Wuhan alone as of Wednesday 3,169 people died since January.
The virus was first reported in Wuhan in December last year. Also, Hubei reported 58 new suspected cases and nation-wide 159 people were still suspected of being infected with the virus, the NHC said.
Hubei health commission said on Thursday that 914 people were still in severe condition and another 287 in critical condition in hospitals.
The province so far reported a total of 67,801 COVID-19 confirmed cases, including 50,006 in Wuhan.
As of Wednesday, the overall confirmed cases on the Chinese mainland had reached 81,285, this included 3,287 people died of the disease, 3,947 patients still being treated and 74,051 patients discharged after recovery, the NHC said.
China on Wednesday downgraded the risk level of the coronavirus in its epicentre Wuhan from high to medium and resumed bus services within the city for the first time since the nine-week lockdown. -- PTI
« Back to LIVE