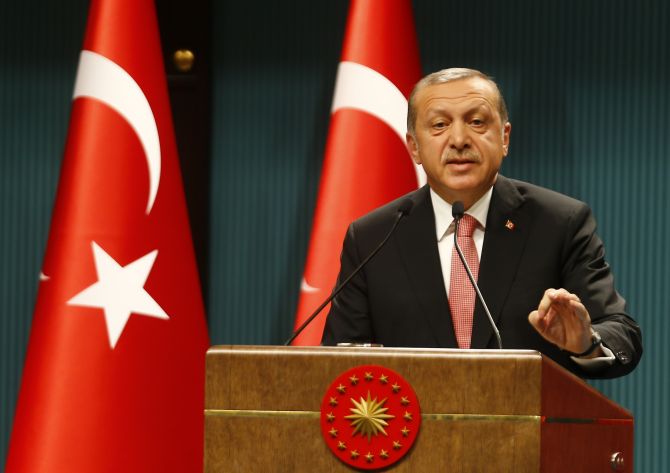 India on Thursday hit out at Turkish President Recep Tayyip Erdogan and the United Kingdom's junior foreign minister Nigel Adams for their "irresponsible" comments over violence in the national capital when it is going through a "sensitive time".
External Affairs Ministry spokesperson Raveesh Kumar said Erdogan's comments were "factually inaccurate" and driven by his "political agenda".
Last week, the Turkish president had severely criticised India for the communal clashes in Delhi and even went on to call them "massacres of Muslims".
Kumar said India had made a strong demarche on the matter with the Turkish Ambassador in Delhi on Tuesday.
"The comments are factually inaccurate and are driven by his political agenda. We do not expect such irresponsible statements from a Head of State," Kumar said.
On the United Nations High Commissioner for Human Rights approaching the Supreme Court against the citizenship amendment law, Kumar said it is now for the top court to decide on the issue.
Asked about comments by Adams on the violence in Delhi, Kumar said the situation in the capital is fast returning to normal and that law enforcement agencies are doing their best to restore confidence and ensure that law and order is maintained.
"Prime Minister has appealed for peace and brotherhood. Senior officials have visited the place of violence, peace committees have been formed and other steps have been taken in this direction," he said.
"At this sensitive time, we would urge people not to make any irresponsible comments and not to be influenced by selective and unsubstantiated narrative on the matter," he said.-- PTI
« Back to LIVE