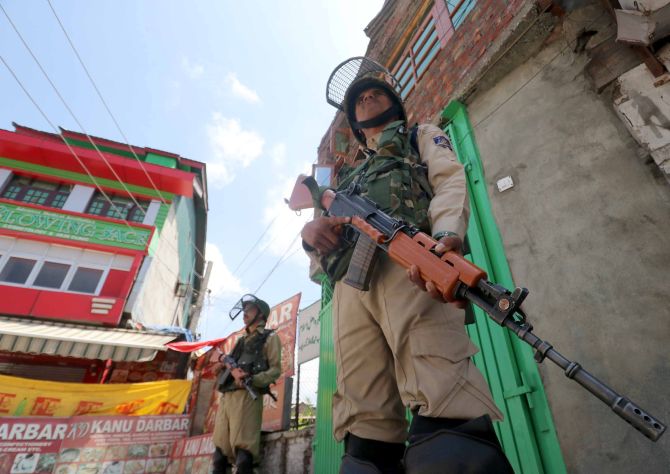 Broadband internet services were restored in Kashmir on Thursday, a day after the Jammu and Kashmir administration lifted a ban on social media in the Union territory, ending a seven-month information blackout in the valley, officials said.
Internet services were snapped across all platforms on August 4 last year.
The next day, the Centre revoked the special status of the erstwhile state of Jammu and Kashmir.
"The broadband services have been restored in the valley this afternoon," the officials said.
The ban on accessing social media sites and applications was revoked by the authorities on Wednesday.
In an order issued as part of the weekly review process, they reiterated the restrictions imposed earlier but remained silent on the social media ban.
The government lifted restrictions on access to thousands of sites like Facebook and popular messaging app WhatsApp through mobile internet platforms.
However, the cap on internet speed will remain and mobile data service will be restricted to 2G.
Netizens found the sudden lifting of the social media ban hard to believe, with some wondering what prompted the decision.
"I do not know what has changed in the past few months that the government has lifted the ban. The ban in the first place was misplaced and unnecessary," Naveed Anjum, a software programmer, said.
Iltija Mufti, tweeting from the account of her mother and detained People's Democratic Party president Mehbooba Mufti, said it seemed that the administration realised the futility of the ban as "Kashmiris circumvented it through VPNs" and "outwitted state apparatus".
The internet services were restored in Jammu and Kashmir in a staggered manner.
The restrictions on mobile and internet services were partially eased after the Supreme Court said in January that access to the Internet is a fundamental right under Article 19 of the Constitution and asked the government to review the curbs. -- PTI
« Back to LIVE