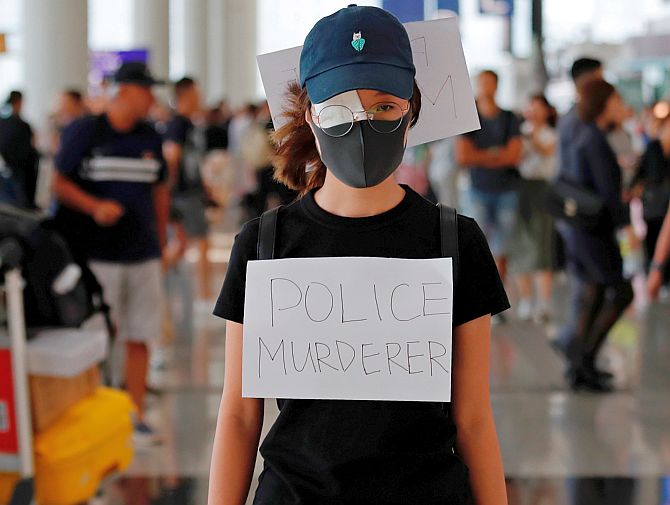 Chinese President Xi Jinping on Tuesday signed a controversial security law that gave Beijing new powers over Hong Kong that are tailor-made to crackdown against dissent, criminalising sedition and effectively curtailing protests, amidst global anger and outrage in the former British colony.
Xi signed the legislation soon after Chinese lawmakers voted unanimously to adopt the Law of the People's Republic of China on Safeguarding National Security in the Hong Kong Special Administrative Region.
The law -- facilitating the presence of Chinese security offices in Hong Kong, besides prohibiting acts of secession, subversion, terrorism and collusion with foreign forces to endanger national security -- was passed by the 162-member Standing Committee of China's legislature the National People's Congress.
As soon as the draft legislation was adopted by the NPC, regarded as the rubber-stamp Parliament for its routine approval of whatever the ruling Communist Party of China proposes, Xi signed it immediately, making it into law ready for implementation.
The United States, the United Kingdom, the European Union and NATO have expressed concern on the new law and warned of retaliatory measures.
US Commerce Secretary Wilbur Ross said Washington has suspended regulations allowing Hong Kong to import US technology because of security risks posed by the law, which he said would undermine the city's semi-autonomous status.
The law would heighten the risk that sensitive US tech exports to the city -- including metal alloys, high-powered computers and lasers -- would be diverted for use by the Chinese military or the Chinese Ministry of State Security, Ross was quoted as saying by the Hong Kong-based South China Morning Post.
"Further actions to eliminate differential treatment are also being evaluated," Ross said in a statement issued in the US. "We urge Beijing to immediately reverse course and fulfil the promises it has made to the people of Hong Kong and the world," he said.
The US was Hong Kong's second-largest trading partner in 2019, with trade worth USD 67 billion, official data showed.
The EU condemned Beijing's move, saying it is "in the process" of considering follow-up action with lawmakers and international partners.
"We deplore this decision. This law risks seriously undermining the high degree of autonomy of Hong Kong, and having a detrimental effect on the independence of the judiciary and the rule of law," European Council President Charles Michel said. -- PTI
« Back to LIVE