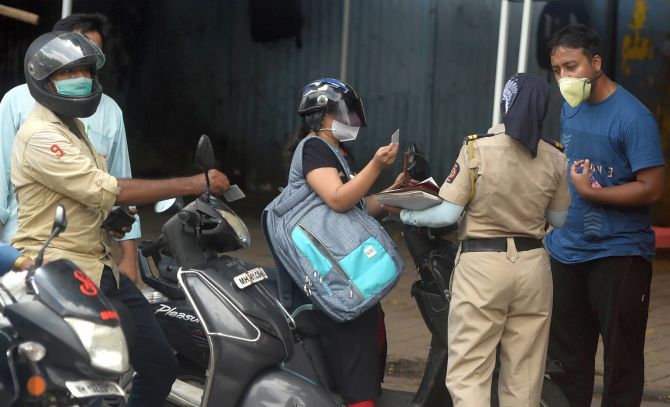 A total of 16,291 vehicles were seized in Mumbai on Monday on the second day of a crackdown on journey distance violations amid the coronavirus outbreak, police said.
The police had, on Monday, issued a diktat prohibiting people from moving beyond a 2-kilometre radius from their homes in a bid to contain the virus spread.
The number of vehicles seized from the city's 12 police zones was 875, 654, 392, 430, 159, 1138, 1823, 187, 582, 461, 389 and 418, while port zone seized 172 vehicles, taking the total to 7,680, an official said.
The traffic unit of Mumbai police seized 8,611 vehicles, comprising 1601 private cars, 6241 two-wheelers, 474 autorickshaws and 295 taxis on Monday, he added. -- PTI
Image: Commuters argue with the police during strict checking amid COVID-19 lockdown, at Byculla in Mumbai. Photograph: Shashank Parade/PTI Photo
« Back to LIVE