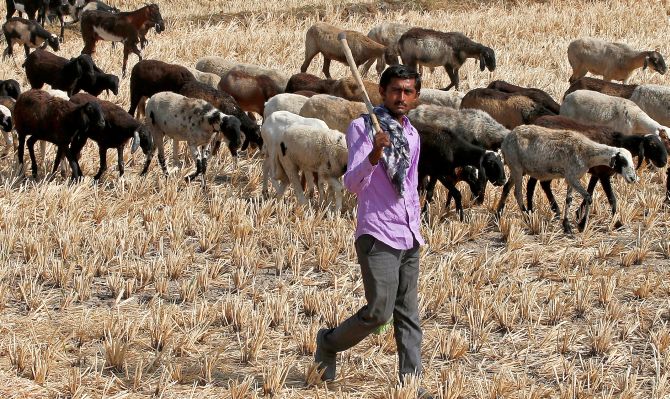 Representational image
About 50 goats and sheep have been kept in isolation at a village in Tumakuru district in Bengaluru after a shepherd tested positive for coronavirus, officials said on Tuesday. The villagers panicked when they noticed that some goats and sheep at Godekere village in Gollarahatti taluk were having respiratory problems, an officer in the animal husbandry department of the district said.
Speaking on the condition of anonymity, the officer told PTI: "A few of the animals whom the shepherd had reared developed respiratory problems....Now that there is corona scare everywhere, people are afraid that the animals too have contracted the disease."
The villagers then sought the help of Karnataka Law and Parliamentary Affairs Minister J C Madhuswamy, who is the Tumkuru district in charge minister, and the Deputy Commissioner of the district K Rakesh Kumar to get the matter investigated. The minister directed the animal husbandry department to probe the matter following which department officials rushed to the village and collected samples. Veterinary experts suspect that the animals are suffering from Peste des petits ruminants, also known as goat plague, and mycoplasma infection. -- PTI
« Back to LIVE