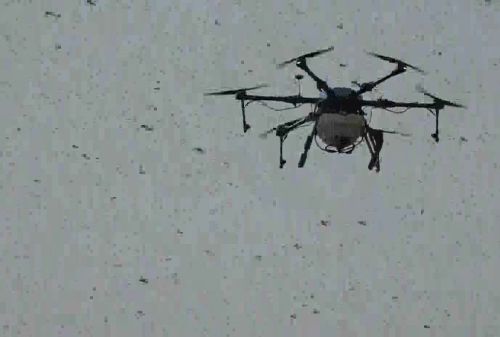 Drones are being used to spray insecticides as swarms of locusts arrived in Uttar Pradesh's Agra district following which 60 per cent of locusts have been killed, said SN Singh, Assistant Director, Agriculture Department.
Speaking to ANI, SN Singh, Assistant Director, Agriculture Department said, "Around 60 per cent of locusts have been killed. Four drones given by the central government are being used to spray insecticides".
"The swarms of locusts arrived here at around 8 pm to 9 pm yesterday. We used tractors and fire brigades for spraying here. Now a team assigned by Central Government has also arrived here with four drones to kill the locusts," said Rampravesh Kumar, District Agricultural, Defense Officer Agra.
A resident, Nihal Singh who came out for a walk, told ANI that a large number of locusts surfaced this early in the morning and it became difficult for the locals to even walk.
« Back to LIVE

He had recently been in the headlines for his stout defence of the Nitish Kumar administration when it was under attack from the Shiv Sena-led government in Maharashtra over Bihar Police's probe into the death of Rajput.

The film-maker will be called for questioning in connection with the alleged seven-year-old incident.

The hospital, located in Parel area, on Tuesday got the approval of the Maharashtra ethics committee for conducting the vaccine trials.

E-com cos fret over Madras HC ruling on GST refunds

The high court's order, which says refunds paid on service inputs can be restricted, runs contrary to Gujarat HC verdict and could complicate matters.