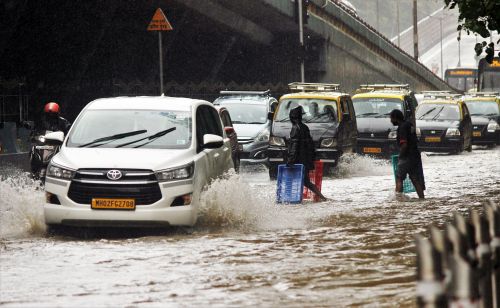 Heavy rains lashed Mumbai overnight with some parts receiving extremely heavy showers, the India Meteorological Department said on Thursday. Areas like Bandra and Mahalaxmi in the city received 201 mm and 129 mm rainfall, respectively, between 8.30 am on Wednesday and 6.30 am on Thursday, IMD Mumbai's Deputy Director General K S Hosalikar said. Heavy rainfall is likely in the city on Thursday, he said.
According to the IMD, the Santacruz weather bureau, representative of Mumbais suburbs, reported 191.2 mm rainfall during the 24-hour period ending at 8.30 am on Thursday, while the Colaba weather station in South Mumbai recorded 156.4 mm rainfall in the same time span.
It rained in Mumbai throughout the night, leading to extremely heavy falls at isolated places, Hosalikar tweeted. "Heavy showers are likely in Mumbai on Thursday, the official added. The Harnai weather station in coastal Ratnagiri district reported 127.2 mm rainfall during the 24-hour period, while the Ratnagiri observatory recorded 97.5 mm rains during the period. Nanded and Osmanabad districts in Marathwada region of the state received 96.4 mm and 25.8 mm rains, respectively.
The Thane Belapur Industries Association weather station recorded 58.8 mm rains, the IMD said. Jalgaon district in North Maharashtra received 53 mm rains, while Matheran and Alibaug in Raigad district reported 48 mm and 41.6 mm rainfall, respectively. Besides, Solapur district in western Maharashtra received 35 mm rain, while Dahanu observatory in Palghar district recorded 21.1 mm rainfall. PTI
« Back to LIVE