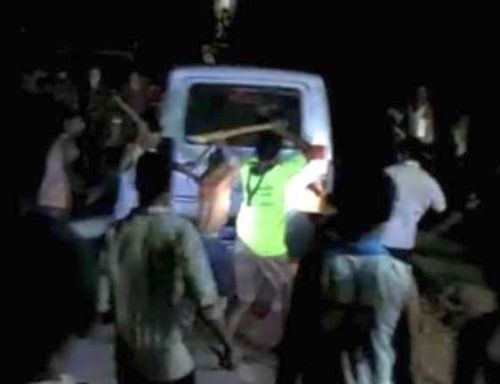 The Maharashtra CID's chargesheet in the Palghar lynching case in which two monks and their driver were beaten to death by a mob three months ago, says that the incident was a fallout of rumours that child-lifting gangs were operating in the area whose members posed as seers or uniformed personnel like policemen, an official said.
The Criminal Investigation Department on Wednesday filed the chargesheets, one running into 4,955 pages and another of 5,921 pages, in the court of Judicial Magistrate First Class (JMFC) at Dahanu taluka in Palghar district located adjoining Mumbai.
Two monks and their driver were lynched by the mob at Gadchinchale village in the district on April 16 when they were travelling in a car to Surat (Gujarat) to attend a funeral amid the coronavirus-induced lockdown.
"According to the chargesheet, a few days before the incident of lynching, rumours had spread in Gadchinchle village and the surrounding area about the child lifting gangs in operation," the official said on Thursday.
"This has come to light during the investigation and any other angle for the lynching of sadhus has been ruled out," he said. According to the official, the CID also collected cyber evidence, including messages and posts about child- lifting gangs that were circulated on social media platforms in the area. -- PTI
« Back to LIVE