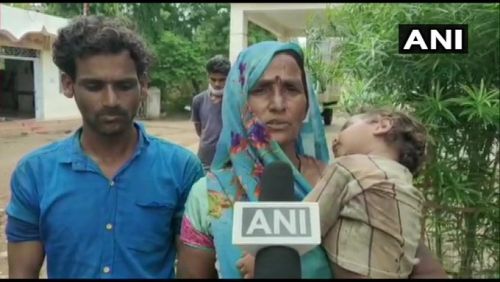 Mother of victim in Guna incident says the police asked them to vacate the land. "70 policemen came and asked us to vacate land saying it belongs to the government. We requested them to let us reap agriculture produce first. But they started abusing and beating us. My son took poison in anger but police ignored. We admitted him to hospital."
Congress leader Rahul Gandhi on Thursday condemned the attack on the Dalits by policemen in Madhya Pradesh's Guna district, saying "our fight is against this injustice".
A purported video of the incident on social media showed the police hitting a Dalit man mercilessly with batons and his wife and others trying to save him. Sharing the video of the assault on Twitter, Gandhi said, "Our fight is against this mindset and injustice".
Officials had said that a Dalit couple, who were being removed from a plot of government land allotted for a college in Guna city, consumed pesticide in protest on Tuesday.
"The (farm) land was reserved for a government model college. Rajkumar Ahirwar (38) and his wife Savitri (35) were working on the land. Gabbu Pardi, who had encroached on the land, had given them work," District Collector S Vishwanathan had said.
When officials asked them to vacate the field, they protested and drank pesticide at the behest of those who had encroached on the land, he had claimed. The two also refused to go to hospital so the police had to use force to take them to hospital, the collector had claimed.
« Back to LIVE