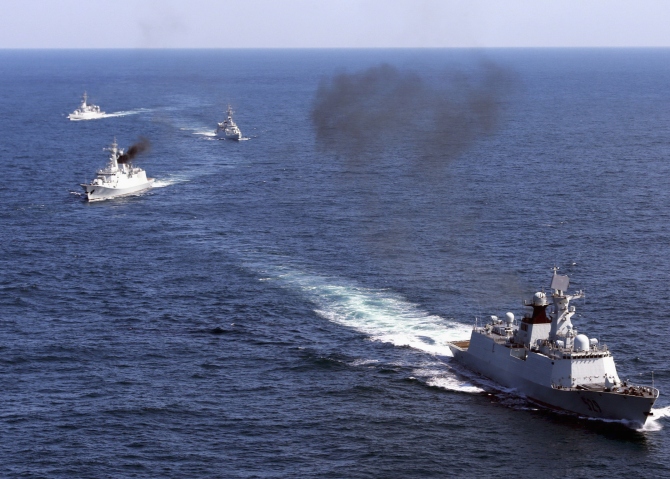 Asserting that the "Chinese predatory world view" has no place in the 21st century, the Trump administration, in a major policy decision on Monday, categorically rejected the territorial claims made by Beijing in South China Sea, stating that it has no legal grounds to unilaterally impose its will on the region.
"The world will not allow Beijing to treat the South China Sea as its maritime empire. America stands with our Southeast Asian allies and partners in protecting their sovereign rights to offshore resources, consistent with their rights and obligations under international law," US Secretary of State Mike Pompeo said in a major policy announcement.
The United States, he said, stands with the international community in the defence of freedom of the seas and respect for sovereignty and rejects any push to impose "might makes right" in the South China Sea or the wider region.
Pompeo said China cannot lawfully assert a maritime claim -- including any exclusive economic zone (EEZ) claims derived from Scarborough Reef and the Spratly Islands -- vis-a-vis the Philippines in areas that a tribunal found to be in the Philippines' EEZ or on its continental shelf.
The US, he said, rejects any Chinese claim to waters beyond a 12-nautical mile territorial sea derived from islands it claims in the Spratly Islands (without prejudice to other states' sovereignty claims over such islands).
Also, China has no lawful territorial or maritime claim to (or derived from) James Shoal, an entirely submerged feature only 50 nautical miles from Malaysia and some 1,000 nautical miles from China's coast, Pompeo said.
"We are making clear: Beijing's claims to offshore resources across most of the South China Sea are completely unlawful, as is its campaign of bullying to control them," he said.
In the South China Sea, the US seeks to preserve peace and stability, uphold the freedom of the seas in a manner consistent with international law, maintain the unimpeded flow of commerce and oppose any attempt to use coercion or force to settle disputes, Pompeo said.
He alleged that Beijing uses intimidation to undermine the sovereign rights of Southeast Asian coastal nations in the South China Sea, bully them out of offshore resources, assert unilateral dominion and replace international law with "might makes right".
Beijing's approach has been clear for years, Pompeo said. In 2010, then Chinese foreign minister Yang Jiechi told his ASEAN counterparts that "China is a big country and other countries are small and that is just a fact", he said, adding that the Chinese predatory world view has no place in the 21st century.
China "has no legal grounds to unilaterally impose its will on the region", the secretary of state said. Beijing has offered no coherent legal basis for its "Nine-Dashed Line" claim in the South China Sea since formally announcing it in 2009, he added.
In a unanimous decision on July 12, 2016, an Arbitral Tribunal constituted under the 1982 law of the sea convention -- to which China is a state party -- rejected the country's maritime claims as having no basis in international law. The tribunal sided squarely with the Philippines, which brought the arbitration case, "on almost all claims", Pompeo said.
The announcement by the Trump administration was welcomed by several top American lawmakers. -- PTI
« Back to LIVE