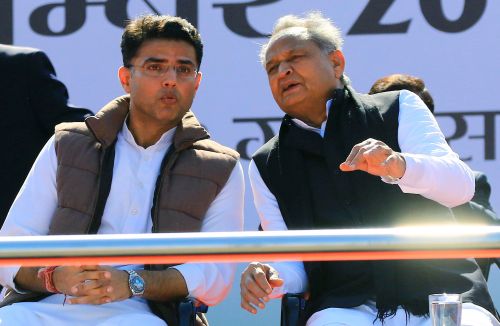 Sachin Pilot and Ashok Gehlot in better times
Police personnel across the Rajasthan have been alerted to maintain peace in their jurisdiction amid the political crisis in the state, an official said. "Following intelligence inputs and political happenings, police force across the state has been alerted to ensure peace and maintain law and order situation," ADG (Law and Order) Saurabh Srivastava said. He said that police force has been asked to keep a vigil so that common people do not have to suffer.
The Congress on Tuesday sacked Sachin Pilot from the posts of Rajasthan's deputy chief minister and the party's state unit chief. Cracking the whip on the rebel party leader, the party also removed his loyalists Vishvendra Singh and Ramesh Meena from the state cabinet.
The demand for a floor test by the members of the Sachin Pilot camp has gained momentum, with Ramesh Meena saying this will make it clear how many MLAs are with the Ashok Gehlot government. PTI
« Back to LIVE