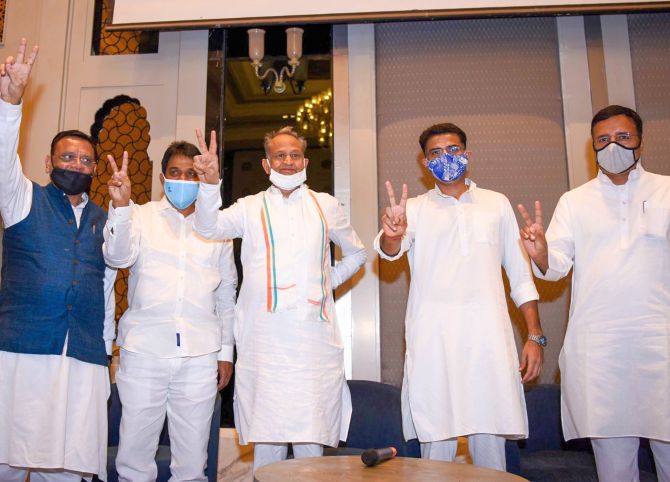 Two video clips of Rajasthan's Bharatiya Tribal Party MLA Rajkumar Roat surfaced on social media on Tuesday with the leader claiming in one of these that he has been kept like a 'hostage' and not allowed to go to his constituency.
The videos are shot in a car with the MLA occupying the front seat.
One of these is purportedly shot by the MLA himself.
It is not clear when the videos were shot.
In the video uploaded on social media in the evening, a police inspector is seen taking away keys of his car, with a constable saying 'there is a threat'.
In one of the video clips that surfaced earlier in the day, the Chorasi MLA, while referring to the current political crisis in the state, was heard saying that he has been kept like a hostage.
The video was uploaded on rebel Congress leader Sachin Pilot's official WhatsApp group.
Roat said he has been at the MLA quarters in Jaipur for the past three days where many asked him to come along.
The MLA said when he tried to leave for his constituency, three to four police vehicles came there and did not let him go.
He is seen alleging that police vehicles surrounded his car and his keys were taken away from him.
The MLA also showed two police vehicles parked around his car.
The Congress has counted both BTP MLAs as supporters of the Ashok Gehlot government.
They had voted for Congress candidates in the Rajya Sabha elections last month but their party issued a whip on Monday, directing them to remain neutral and not vote for the BJP or the Congress in case of a floor test in the assembly. Roat has switched off his mobile phone.   -- PTI
« Back to LIVE