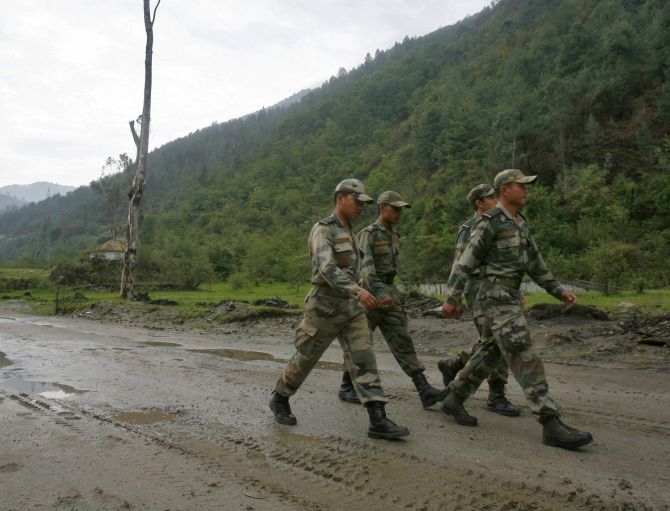 Indian and Chinese military commanders on Tuesday held over 10-hour-long intense negotiations on finalising a framework for a "time-bound and verifiable" disengagement process from all the friction points in eastern Ladakh including Pangong Tso and Depsang, people familiar with the developments said.
The marathon fourth round of Lt General-level talks also focussed on steps for pulling back large number of troops and weapons from rear bases along the Line of Actual Control (LAC) in eastern Ladakh, they said.
The Indian side insisted on "total restoration" of status quo ante in all areas of eastern Ladakh prior to May 5 when the standoff began following a clash between Indian and Chinese troops in Pangong Tso, sources said.
It also conveyed concerns over China's "new claim lines" in the region and demanded immediate withdrawal of Chinese troops from a number of areas including Pangong Tso, they said. There was no official word on details of the meeting.
The talks began at around 11 am at a designated meeting point in Chushul on the Indian side of the de-facto border between the two countries and continued beyond 9 pm.
The Indian delegation was led by Lt Gen Harinder Singh, the commander of the Leh-based 14 Corps, while the Chinese side was headed by the commander of the South Xinjiang military region.
The key focus of the talks was learnt to be on rolling out the phase two of the disengagement process besides firming up modalities for withdrawal of forces and weapons from the rear bases in a time-bound and verifiable manner, the sources said, adding they were aimed at further de-escalation of the situation at various friction points.
The third round of military talks on June 30 lasted for 12 hours.
The talks are taking place days after implementation of the first phase of the disengagement process from the friction points.
-- PTI
« Back to LIVE