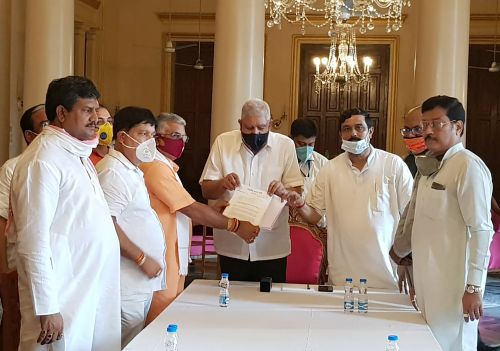 West Bengal BJP leader and Hemtabad MLA Debendra Nath Roy died due to hanging and no other injury mark was found on his body, according to the post-mortem report released on Tuesday. Ray's body was found hanging from the ceiling of a verandah outside a shuttered shop near his home in Bindal village in North Dinajpur district on Monday.
The post-mortem report stated, "Death was due to hanging. No other injury was detected."
The West Bengal Police said a suicide note was found in his shirt's pocket where he blamed two people for his death. Ray's family and the BJP, however, claimed he was "murdered by the TMC", a charge denied by the ruling party in the state. Ray's family members and the saffron party demanded a CBI inquiry into his death. Ray had won the Hemtabad (reserved) seat on a CPI(M) ticket in 2016 but later joined the BJP. He had, however, not quit his assembly seat. PTI
Image: A BJP delegation met West Bengal Governor Jagdeep Dhankar over the Dinajpur incident, yesterday. Pic: ANI
« Back to LIVE