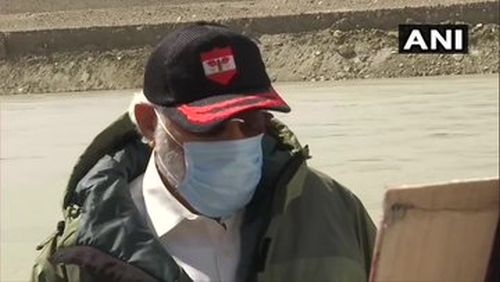 Shiv Sena leader Priyanka Chaturvedi on Friday said that Prime Minister Narendra Modi's visit to Leh, Ladakh is important and it sends a good message of solidarity to the troops.
"PM Modi's visit to Leh is important and sends a good message of solidarity with the troops especially after his comments on June 19th. If he was criticised for that, he must be acknowledged for this," Chaturvedi tweeted.
Prime Minister Narendra Modi on Friday made a surprise visit to Ladakh and was briefed by senior officers in Nimmoo amid ongoing tension with China. The Prime Minister was accompanied by Chief of Defence Staff (CDS) General Bipin Rawat and Army Chief General Manoj Mukund Naravane.He reached Nimmoo, early morning today and interacted with Army, Air Force and ITBP personnel.
Located at 11,000 feet, this is among the tough terrains, surrounded by Zanskar range and on the banks of the Indus. -- ANI
« Back to LIVE