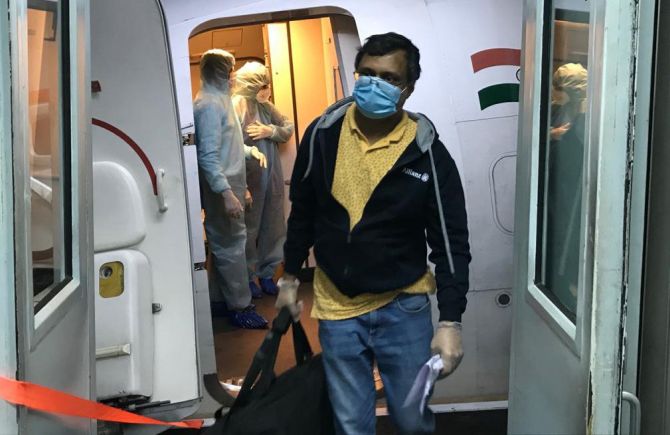 The MEA on Friday said that over 5 lakh stranded Indians have returned safely to India from 137 countries under the Vande Bharat Mission.
"The VBM operations commenced on May 7, 2020 and in less than two months 5,03,990 stranded Indians from 137 countries, including from remote areas, have returned to their homes. Considering that the initial target to bring stranded Indians with compelling reasons was only 2 lakh, this is a significant achievement," MEA said in a release.
According to the release, Kerala received the largest number of stranded Indians (94,085), followed by Uttar Pradesh, Bihar, Tamil Nadu, West Bengal, Maharashtra, Karnataka, Gujarat and Andhra Pradesh.
The largest number of stranded Indians returned by VBM flights are from UAE (57,305), followed by Kuwait, Qatar, Oman, Saudi Arabia and USA and from Nepal (91,193) have returned through land border check posts, the ministry said.
The mission involved 860 Air India flights; 1256 charter flights and 8 Naval Ships. The stranded Indians returned by Air India were 1,64,121; Indian Navy 3,987 in 8 ships from Maldives, Iran and Colombo; chartered flights - 2,30,832 and foreign carriers - 3,969; about 60 air ambulances and 95,220 through land border check-posts from neighboring countries.
"This massive operation was carried out with the active support and cooperation of Indian Missions abroad, MoCA, MHA, MoHFW and State Governments. The MEA designated senior officers as State Coordinators were at the forefront of these operations ensuring smooth coordination at all levels," said the MEA release.
-- ANI
« Back to LIVE