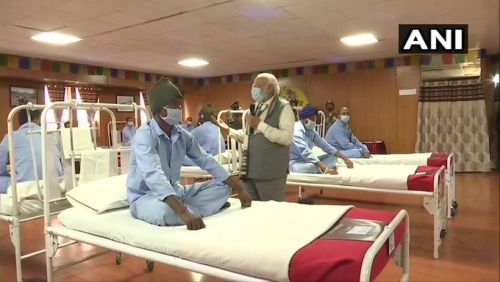 Update: "Our country has never bowed down and will never bow down to any world power, and I am able to say this because of braves like you," Prime Minister Narendra Modi said on Friday while interacting with the soldiers, who were injured in the June 15 clash with the Chinese troops in eastern Ladakh's Galwan Valley.
"We will never bow down to any power of the world, said the Prime Minister in a veiled reference to China. His remarks came during his interaction with the injured soldiers at a hospital in Leh.
"I have come here to thank each one of you. Our India becomes self-reliant. Our country has never bowed down and will never bow down to any world power. I pay my respects to you as well as the mothers who gave birth to braves like you. Hope everyone gets well soon," he said.
Lauding the soldiers he said, "The braves who left us, they did not depart without reason, all of you gave a befitting reply. Your bravery, the blood you shed will inspire our youth and countrymen for generations."
"You all gave a befitting reply. You are in a hospital that's why you may not know that 130 crore citizens are proud of you. A message has gone to the world about the valour shown by you braves. The way you stood up to the powers, the world wishes to know who are these braves? What is their training? What is their sacrifice? The world is analysing your bravery. The blood you have shed is an inspiration to our country," he said.
Earlier addressing the soldiers in Nimu, Prime Minister Narendra Modi, in an apparent dig at China said the age of expansionism is over and added that the new age of development is here.
"From Leh, Ladakh to Siachen and Kargil...and Galwan's icy waters...every mountain, every peak is witness to the valour of Indian soldiers. Age of expansionism is over, this is the age of development. History is witness that expansionist forces have either lost or were forced to turn back," said PM Modi.
The Prime Minister also said that the people of Ladakh have rejected every attempt to create separatism in the region."Ladakh is the head of the country. This is the symbol of pride for the 130 crore citizens of India. This land belongs to the people who are willing to make the ultimate sacrifice for the country... Every attempt to create separatism in the region was rejected by the nationalist people of Ladakh," Modi said.
« Back to LIVE