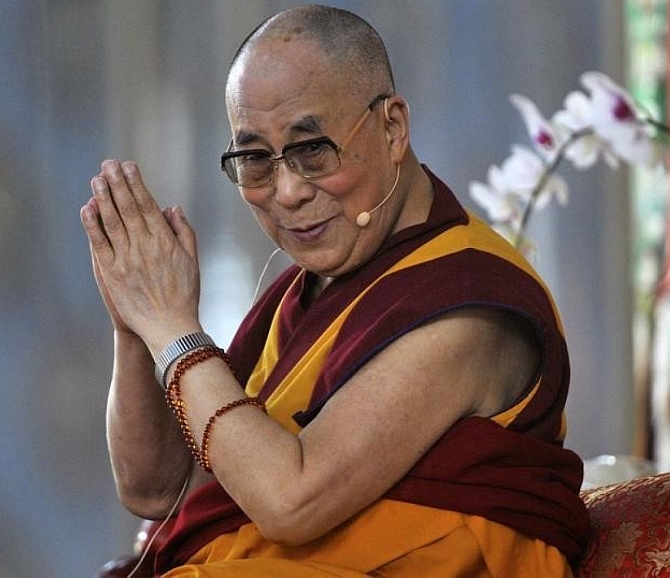 Tibetan spiritual leader, the Dalai Lama, has advised his followers in China to chant a mantra to contain the threat posed by coronavirus, which has reportedly left over 100 dead.
A group of mainland Chinese devotees on Facebook had requested for the Dalai Lama's advice amid widespread health scare after the virus was discovered in Wuhan.
Responding to their concern, the Dalai Lama advised his followers and Buddhist monasteries across China to chant the 'Tara Mantra' as it would be "beneficial for effectively containing the spread of the virus".
He has asked the people suffering from the disease to chant the matra, "Om tare tuttare ture Soha", to maintain the peace of mind and remain free from worries.
He also shared a voice clip, himself chanting the mantra.
According to reports, the death toll due to the virus in China has risen to 106.
In the past 24 hours, around 1,300 new cases have been reported.
Coronavirus is a large family of viruses that causes illnesses ranging from common cold to acute respiratory syndromes. -- PTI
« Back to LIVE

The court also imposed a fine of Rs 10,000 each, public prosecutor Manuji Upadhyay said in a statement, adding that 32 witnesses were examined along with 220 documents and items.

The chief minister said certain steps by the government, including the introduction of an electric vehicle policy in 2020 and 24-hour electricity supply, had led to an 18.6 per cent decline in air pollution levels in the last four years.

Equity indices made an emphatic comeback on Friday after falling for seven straight sessions after the RBI hiked interest rates by 50 basis points on expected lines and projected inflation coming under control from January next year. A...

The Madras high court on Friday directed the Rashtriya Swayamsevak Sangh (RSS) to hold its 'route marches' and public meetings in 51 places in Tamil Nadu on November 6, instead of the originally proposed October 2.