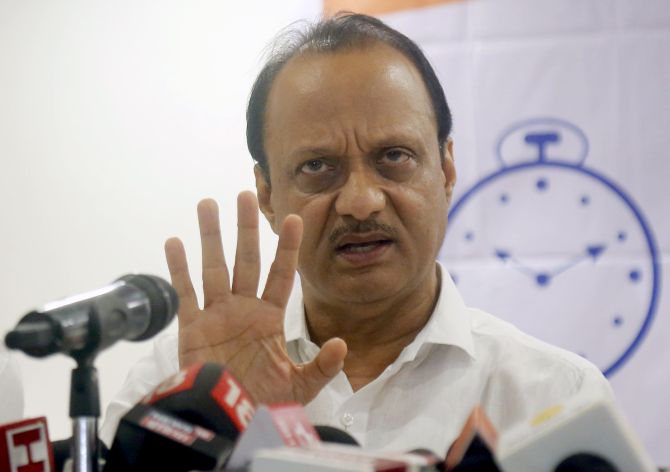 The Maharashtra government was trying to go to the root of the 2017 Elgaar Parishad case when it was suddenly handed over to the National Investigation Agency by the Centre, Deputy Chief Minister Ajit Pawar said on Sunday.
He also sought to remind the Centre about the federal structure of governance when asked about the development.
"I feel that the Centre and state governments should do their respective works. The Centre can intervene when an issue of the national level crops up," Pawar told reporters on the sidelines of the launch of Rs 10 'Shiv Bhojan Thali'-- a flagship scheme of the Shiv Sena-NCP-Congress government.
Pune Police are probing whether "provocative" speeches made at the Elgaar Parishad conclave in Pune on December 31, 2017, led to the caste violence around Koregaon Bhima in the district the next day.
Police had first used the term 'urban naxals' during the investigation after arresting nine activists and lawyers, including Telugu poet Varavara Rao and Sudha Bharadwaj.
"I recently met state Home Minister Anil Deshmukh and his deputy Satej Patil. We were briefed about the case by investigating officials. I felt they were trying hard to probe
the case," Pawar said while responding to a query on the NIA taking over the probe.
"In the event of any untoward incident, the basic objective is to investigate that incident, go to its root, check facts and avoid any communal rift. The state government was intending to investigate the case on that line, but suddenly the Central government decided to take over the case," he said.
-- PTI
« Back to LIVE