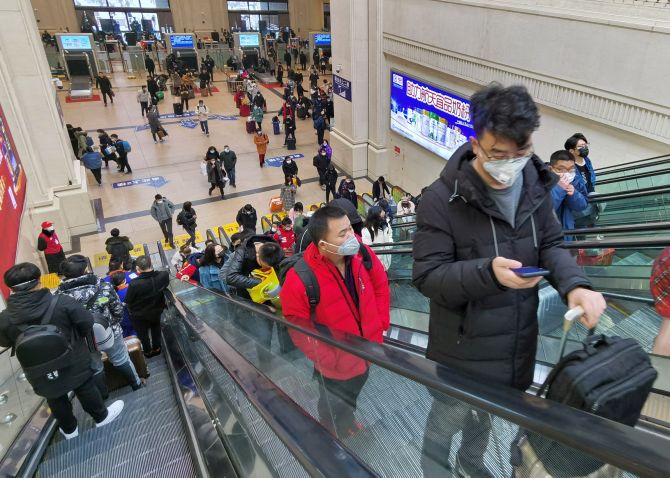 As the coronavirus turned virulent, India is understood to have requested China to permit over 250 Indian students stuck in Wuhan, the epicentre of the new SARS-like virus, to leave the city, sources in Beijing said on Saturday.
About 700 Indian students, mostly medical students, are believed to be studying in different universities in Wuhan and its surrounding areas. Authorities have prevented anyone from leaving Wuhan, the city of 11 million people at the heart of the viral outbreak which has so far infected nearly 1,300 people and killed 41 others.
While majority of the Indian students left for home on Chinese New Year holidays, over 250 to 300 students are said to be still in the city and its surrounding areas.
Besides the students, the fast spreading virus has become a major worry for their parents back home.
Some students managed to leave the city just before it was sealed off on January 23.
India has stepped up monitoring of passengers arriving from China, especially from Wuhan.
The sources here said that in view of the prevailing situation, India has requested both the Chinese Foreign Ministry and the local officials in Wuhan to consider making arrangements for the Indian students to leave.
Asked whether China would consider any request of countries to move their citizens out of Wuhan, Chinese Foreign Ministry spokesman Geng Shuang told media in Beijing on Thursday, "We always help foreign consular officials in China in their official jobs, we offer them all the assistance and convenience necessary and we work to guarantee foreign citizens legitimate rights and interest in China."
While specific detailed would be provided by local officials, he said China in principle always handles issues according to domestic laws, international laws and bilateral consular agreements.
Authorities have extended transport bans to 17 other cities around Wuhan in an effort to control the SARS-like virus, restricting travel for around 56 million in Hubei province.
On Saturday, the city officials have also banned all private transport in the city as part of stepped up measures to ensure little movement in the city.
While India has earlier issued travel advisories to Indians travelling to China in view the coronavirus, the Indian Embassy in Beijing in the last few days has set up hotlines for the students in Wuhan to extend assistance and has talked to local officials about proper supply of food and other necessities for them.  -- PTI
« Back to LIVE