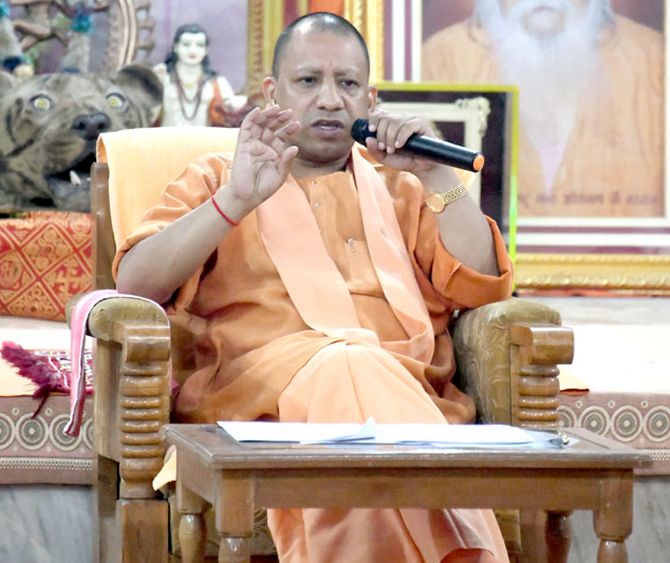 Uttar Pradesh Chief Minister Yogi Adityanath on Wednesday targeted the women-led protests against the amended Citizenship Act, alleging that while the men are sleeping under the quilt at the comfort of their homes, they have pushed their women and children forward to stage sit-ins.
Addressing a rally in support of the CAA in Saket Nagar in Kanpur, Adityanath said, "Now these people (anti-CAA protesters) do not have courage to participate in the protests themselves. They know that if they indulge in vandalism, their property will be seized."
Anti-CAA protests led by women have been reported from different parts of the country with the one at Delhi's Shaheen Bagh occupying the centre stage.
"Now what have they done? They started making the women of their houses sit at roads. The children have been made to sit also. It's such a big crime that the men are sleeping under the quilt, while the women folks have been pushed forward and made to sit at various roads. It is shameful," alleged the chief minister, who had earlier warned protesters indulging in vandalism in his state that their properties would be seized and auctioned to compensate for the damages.
On Wednesday, he also slammed the Congress, the Samajwadi Party and Left parties accusing them of doing politics at the cost of the nation.
"The tactic of pushing the women forward is being resorted to. Those who do not know what the CAA is are staging sit-ins," he alleged.
"If you go and ask anyone as to why are they sitting on a 'dharna', they will say that the men of the house feel that they have become so incompetent that they cannot do anything, so they want the women to go and sit on the 'dharna'.
"For them, the country is not important. The Hindus, Sikhs, Buddhists, Jains and Parsis are not important. Now, for the Congress, even the Christians are not important. And, they have said the protests will continue against the CAA until the ISI agents are given entry in India. This is a shameful statement made by Congress leaders," he alleged.  -- PTI
« Back to LIVE