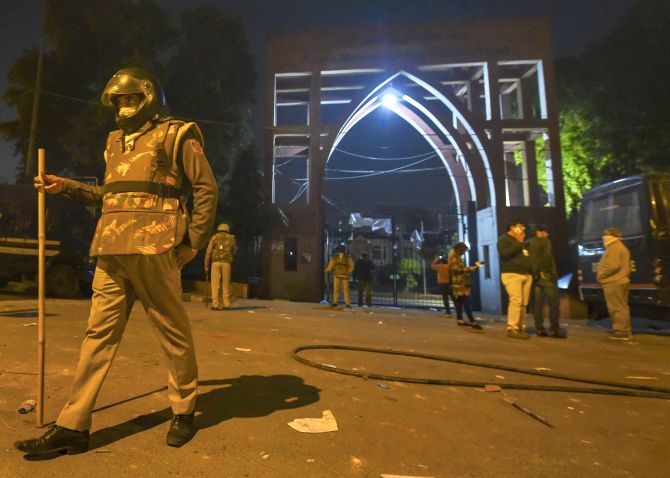 A Delhi court on Wednesday directed the police to file an action taken report (ATR) on the plea of Jamia Millia Islamia University seeking registration of a first information report against alleged police attack on students on the campus last month during protests against the Citizenship (Amendment) Act.
Metropolitan Magistrate Rajat Goyal sought the report from Station House Officer (SHO) of Jamia Nagar Police Station by March 16 stating whether any action has been taken on the complaint by the varsity administration to lodge an FIR.
"Let ATR be called from the SHO concerned in the following respect. Whether any complaint has been made by the complainant in the police station.
"If yes, whether any action has been taken on the said complaint. Whether any investigation or inquiry has been conducted in this regard and if yes, then what is the status of the investigation/ inquiry.
"If any cognisable offence is made out, whether any FIR has been registered or not," the court said.
The plea, filed by the Registrar of JMI University, claimed that police officials had 'illegally' entered the campus on December 15, 2019 when the students were protesting peacefully against the newly amended law and attacked students with tear gas shells, lathi charge and open firing.
It has sought registration of FIR under various Indian Penal Code sections including 295 (defiling place of worship), 297 (trespassing on burial places), 307 (attempt to murder), 342 (wrongful confinement), 435 (mischief by fire or explosive substance), and 120-B (criminal conspiracy).
The plea also sought registration of FIR against relevant provisions of the Prevention of Damage to Public Property Act.
JMIU students and locals had protested at Jamia Nagar in Delhi on December 15, 2019 against the Citizenship (Amendment) Act.
The protesters torched four buses and two police vehicles as they clashed with the police in New Friends Colony.
Police baton charged the protesters and used tear gas shells to disperse the mob before entering the varsity campus, detaining several persons allegedly involved in the violence.
"Police officials have committed serious offences ...and state should be held accountable for such illegal and unlawful acts and excessive/unnecessary force used by the police officials against the innocent protesting students," alleged the plea, filed through advocates Asghar Khan and Tariq Nasir.
The petition further claimed that despite repeated complaints to the police by the varsity administration to lodge an FIR against the alleged police attack, no action has been taken till date.
"Complainant (Registrar) is constrained to approach this court against the Delhi Police officials for illegally breaking out into the campus of University, without seeking any permission from the competent authorities and unlawfully attacking innocent students of the University with tear gas shells, lathi charge and open firing and also for vandalising government property belonging to the University,"  it said.
The plea claimed the civic society along with neighbouring localities had called for a peaceful protest outside the university area and the police allegedly 'broke the gates of the campus, without any having any provocation', to clear the crowd and used 'unjustified, excessive, arbitrary and brute force, in total disregard of law and order'.
"Police officials while entering the premises of the university attacked several guards who were on their duty at the gates and at Jama Masjid gate of the university. They were beaten very badly by the officials.
"The students of the University were mercilessly beaten, hurled abuses, racial and derogatory comments were herald, tear gas shells were fired, lathi charge was done.
"That some of the police officials without any just cause broke open the main library gate and also the doors and windows of the library building and fired tear gas shells on peaceful studying students even inside the library," it alleged.
It said that the police also allegedly broke open the Mosque of the university, vandalising it while the people were offering their prayers and also man-handled the Imam.
It added the police also allegedly detained several students at various police stations.  -- PTI
« Back to LIVE