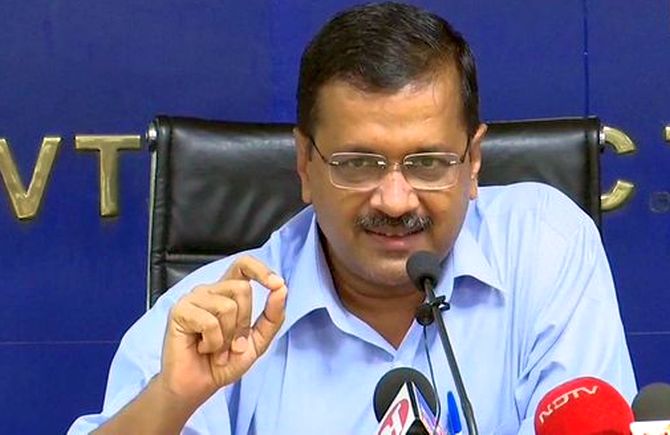 Delhi Chief Minister Arvind Kejriwal on Wednesday said that he has cleared his stand on the Citizenship Amendment Act-National Register of Citizens while asserting that the assembly elections should not be fought on national issues.
"We have always opposed the CAA-NRC issue, and voted against it in the Parliament as well, but I believe the Delhi elections will be fought on issues which affect the national capital," he said.
He also urged people of Delhi, 'especially the workers of the Bharatiya Janata Party and Congress to vote in favour of the Aam Aadmi Party in the upcoming assembly elections'.
"I want to appeal to the people of Delhi, especially those who belong to the BJP, the Congress and other parties, to vote in favour of the AAP. This needs to be done because we have made the schools and hospitals efficient with much hard work, all that work should not be undone.
"Do not leave your parties but vote for the AAP," Kejriwal said.
He also said that his government has worked on different sectors during the last five years and are contesting these elections on the basis of that work.
"The AAP is contesting this election on the basis of the work we have done in the last five years. We worked really hard with honesty and dedication. I have worked like the eldest son of every family in Delhi," Kejriwal said.
"Just like the eldest son of the family, I have taken care of all the needs of a family, be it education, health, electricity, or pilgrimage for the senior citizens," he added.
Delhi, which has 70 seats, is slated to go to polls on February 8.
The counting of votes will take place on February 11. -- ANI
« Back to LIVE