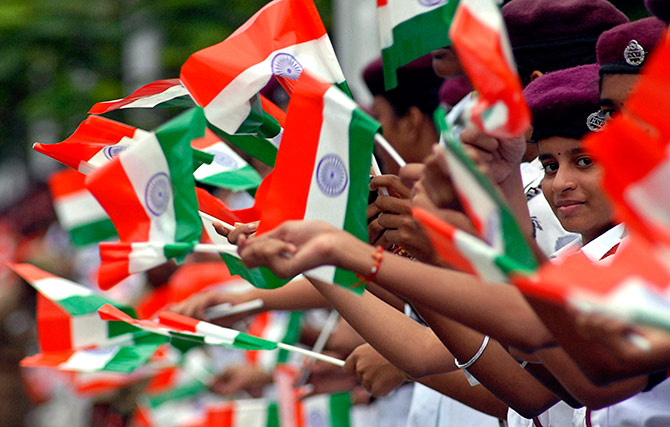 India slipped 10 places to 51st position in the 2019 Democracy Index's global ranking, according to The Economist Intelligence Unit, which cited "erosion of civil liberties" in the country as the primary cause for the downtrend.
India's overall score fell from 7.23 in 2018 to 6.90 in the Index that provides a snapshot of the current state of democracy worldwide for 165 independent states and two territories.
On India, the report said, the country dropped ten places in the Democracy Index's global ranking to 51st. The primary cause of the democratic regression was an erosion of civil liberties in the country.
The index is based on five categories -- electoral process and pluralism; the functioning of government; political participation; political culture; and civil liberties.
Based on their total score, the countries are classified as one of four types of regime: "full democracy" (scores greater than 8); flawed democracy -- scores greater than 6 and less than or equal to 8; hybrid regime -- scores greater than 4 and less than or equal to 6; authoritarian regime -- scores less than or equal to 4".
India was included in the "flawed democracy" category.
Meanwhile, China's score fell to 2.26 in the 2019 index, and the country is now ranked 153rd, close to the bottom of the global rankings.
"Over the past year discrimination against minorities, especially in the north-western region of Xinjiang, has intensified. Digital surveillance of the population continued apace in 2019, representing a further constraint on individual freedoms," the report said.
Among other emerging economies, Brazil was ranked 52nd with a score of 6.86, Russia stood at 134th with a score of 3.11.
Meanwhile, Pakistan was ranked 108th on the overall list with a score of 4.25, while Sri Lanka was at 69th place with a score of 6.27, Bangladesh (at 80th with 5.88 score).
The overall list was topped by Norway, followed by Iceland and Sweden.
Other countries in the top 10 include New Zealand at the fourth place, Finland (5th), Ireland (6th), Denmark (7th), Canada (8th), Australia (9th) and Switzerland (10th).
North Korea was at the bottom of the global ranking at 167th place. -- PTI
« Back to LIVE