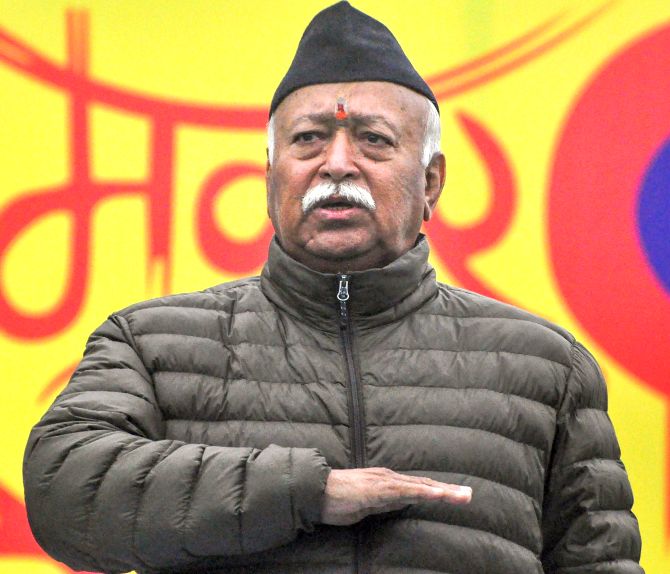 Rashtriya Swayamsevak Sangh chief Mohan Bhagwat on Saturday said his organisation has no connection with politics and it works only to uplift the moral, cultural and human values of the country.
The RSS chief was in Moradabad for a four-day programme with RSS workers.
Addressing a large gathering at the conclusion of the event, Bhagwat said people from all walks of life are a part of the organisation while some also run political parties.
"Elections mean nothing to us. We are working to maintain the values of the country for the last 60 years," he said.
He also denied that the RSS was "remote controlling" the Bharatiya Janata Party pointing out that the organisation was working for all 130 crore Indians.
Elaborating on the organisation, the 69-year-old explained that anyone can be termed as a RSS worker even if they do not come to their shakhas (activity camps) but should have the ideology of national integrity.
Quoting a meeting of Bhoodan Movement founder Vinoba Bhave and former RSS chief M S Golwalkar, he claimed that the social reformer was a friend of the latter with the same ideology, though not a part of the organisation.
"There are so many top class intellectuals and social reformers who are not our allies but have our ideology. This is our success," he asserted.
Bhagwat said that if one wants to spread one's ideology, then, it is essential to gain power.
"Swami Vivekananda always advocated for power with intellect and spirituality. So, always try to be powerful, prosperous and healthy," he said.
Russia, China and USA are powerful countries that are creating problems and USA is losing its dignity, he claimed.
Bhagwat asserted that the RSS was working with very few persons when it was formed in 1925 but has grown into an organisation with 1.3 lakh branches throughout the country due to continuous dedication towards nation building.
Defining their work, he said they adhered to the preamble of the Indian Constitution and invited all persons who want to serve the nation to come forward without any personal interest.
During his one-hour address, Bhagwat quoted many examples to define the work of RSS in the interest of Hindu religion, culture and history.
Incidentally, he said "all Indians are Hindus" as their ancestors were all Hindus. He added that many countries have raised slogans of 'unity from diversity' but in India, there is 'diversity from unity'.
Notably, Bhagwat did not comment on the Citizenship (Amendment) Act and the National Register of Citizens. -- PTI
Image: RSS chief Mohan Bhagwat attends the Makar Sankranti Utsav in Moradabad. Photograph: PTI Photo
« Back to LIVE