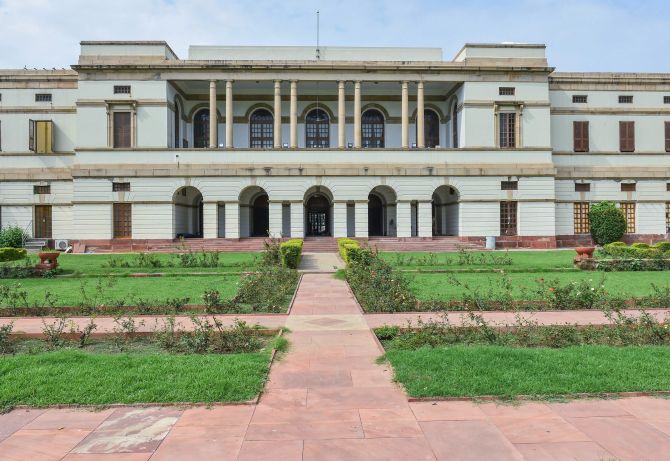 Former principal secretary to the prime minister, Nripendra Misra, has been appointed chairperson of the executive council of the Nehru Memorial Museum and Library, the latest in a string of appointments in the last six months.
In November last year, the government reconstituted the NMML society removing Congress' Mallikarjun Kharge, Jairam Ramesh and Karan Singh as its members and inducting television journalist Rajat Sharma and adman Prasoon Joshi among others.
Culture ministry sources confirmed that 74-year-old Misra, who quit as Prime Minister Narendra Modi's Principal Secretary in August last year, has been appointed through a January 14 order.
A. Surya Prakash, chairperson of the Prasar Bharati board, will be the council's vice chairperson, the order states.
With Misra's appointment, the reconstitution of both the NMML society as well as the NMML executive council, which takes important decisions pertaining to the museum associated with India's first prime minister, is now complete.
According to an order issued in November last year, Prime Minister Narendra Modi is the president of the NMML society and Defence Minister Rajnath Singh its vice president.
Union ministers Amit Shah, Nirmala Sitharaman, Ramesh Pokhriyal, Prakash Javadekar, V Muraleedharan and Prahlad Singh Patel, ICCR chairman Vinay Sahsrabudhhe, Prasar Bharti chairman A. Surya Prakash, secretaries of expenditure, culture and housing and urban affairs, are its members.
Besides, the chairman of the UGC, representative of Jawaharlal Nehru Memorial fund, Raghvendra Singh, director of NMML and journalist Rajat Sharma are also the new members.
The other members include Anirban Ganguly, policy researcher and author, Sachchinanda Joshi, Member Secretary, IGNCA, academic Kapil Kapoor, Lokesh Chandra, Vedic and Buddhist scholar, Makarand Pranjpe, academic, writer Kishor Makwana, academic Kamlesh Joshipura, researcher Rizwan Kadri along with Rajya Sabha member Vinay Sahasrabuddhe and IGNCA Chairman Ram Bahadur Rai. -- PTI
« Back to LIVE