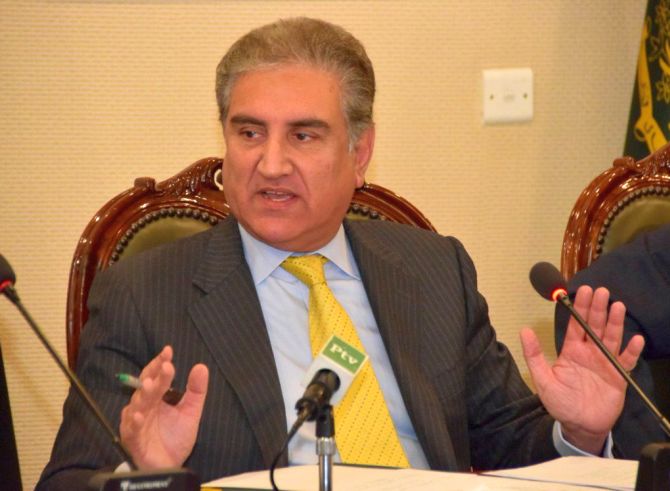 Pakistan is not prepared to pay any price for peace with India and certainly not without resolving the Kashmir issue in a just manner, Foreign Minister Shah Mahmood Qureshi has said. Addressing the Center for Strategic and International Studies (CSIS) think-tank in Washington on Thursday, Qureshi reiterated Pakistan's demand that US President Donald Trump should mediate to resolve the Kashmir issue.
Ties between India and Pakistan came under severe strain after New Delhi revoked Jammu and Kashmir's special status and bifurcated it into two Union Territories on August 5, evoking strong reactions from Islamabad. Pakistan has been trying to rally international support against India on the issue.
"Our government wants peace in the neighbourhood. We want, we need peace in order to focus on achieving our domestic agenda for economic reform and development. But we are not prepared to pay any price for peace with India, certainly not our dignity and certainly not without resolving the Kashmir dispute in a just manner," Qureshi said.
He alleged that instead of fighting poverty and hunger together, the "RSS-inspired BJP government has embarked upon the project of turning India into a Hindu Rashtra".
"The adherence of Hindutva and an Akhand Bharat have established this ascendancy with disastrous consequences for all in India and the world to see," he alleged.
Qureshi said on August 5 India tried to change the "disputed status" of Jammu and Kashmir and "alter" its demographic structure, breaking all relevant international laws and "violating" several UN Security Council resolutions in the process. India has been seeking to break the will of the Kashmiri people by imprisoning them in their homes and imposing a communications blockade that continues to this day, he said. -- PTI
« Back to LIVE