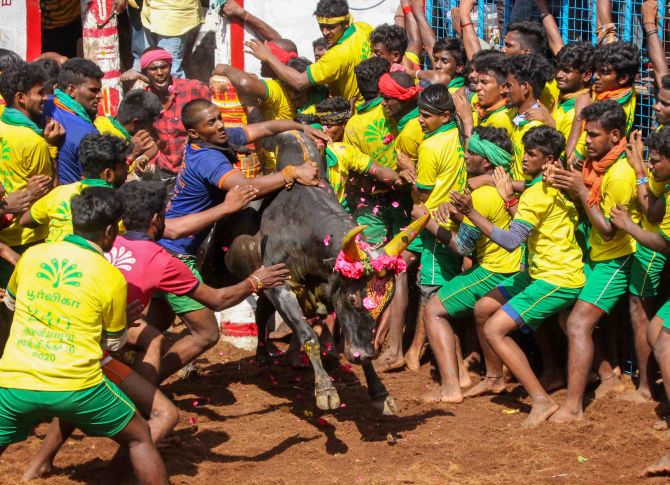 A 26-year-old jallikattu spectator was gored to death by a bull outside the sporting arena at Alanganallur near Madurai on Friday, police said.
In what appeared to be a freak mishap, Sridhar sustained grievous injuries after he was attacked by a bull off the exit and bull collection point.
A native of Sholavandhan village near Madurai, he travelled to Alanganallur to witness the sport.
Another onlooker, Chellapandi of Oothupatti village too died and the reason for his death is being ascertained, they said.
A police official told PTI: "Both of them were spectators and they were not on the ground (as contestants) where the the bull-taming sport was held."
Another official said: "It is suspected that Chellapandi might have had some pre-existing health condition. He fell down and sustained injuries. However, whether he was gored by a bull or not is unclear since there was a huge crowd."
Their bodies were moved to the Government Rajaji Hospital, the official said.
The ongoing jallikattu season began on January 15 at Avaniapuram in Madurai district.  -- PTI
« Back to LIVE