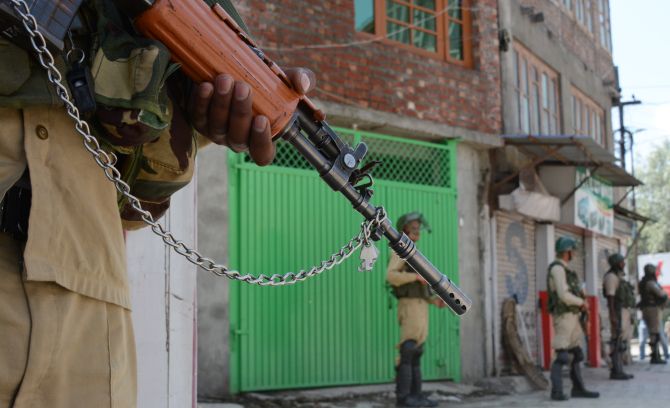 The situation in Kashmir violates human rights, a US Congresswoman has said, as she joined as cosponsors to a resolution urging India to end restrictions on communications and mass detentions in the newly-created Union Territory.
The resolution No 745 that was introduced in the House of Representatives last year by Indian-American Congresswoman Pramila Jayapal now has 36 cosponsors, of whom two are Republicans and 34 from the opposition Democratic Party.
"The situation in Kashmir violates human rights. Thousands have been detained unjustly & millions are without access to the internet & telephones," Congresswoman Debbie Dingell said in a tweet Monday night.
"That's why I signed onto House Resolution 745 so the US can let the world know we will not stand by while these violations happen," she said.
Dingell represents 12th Congressional District of Michigan.
The Congressional resolution is currently before the House Foreign Affairs Committee for necessary action.
Congressman Brad Sherman said he looks forward to getting US Ambassador to India Kenneth Juster's report on his recent visit to Jammu and Kashmir.
"I expect the report to indicate what restrictions the Ambassador faced, in particularly, whether or not the Ambassador was able to visit detainees. The visit and report are valuable only to the extent of the access given," Sherman wrote on Twitter.
A group of 15 envoys, including Juster, visited Jammu and Kashmir last week where they interacted with select political representatives, civil society members as well as the military top brass.
Internet services, landline and mobile phones were snapped across Jammu and Kashmir on August 4, a day before the Centre's announcement to scrap the special status of Jammu and Kashmir and divide it into two union territories.
Though most services, except mobile internet, were restored in Jammu within a week, Kashmir saw landlines and post-paid services being restored in phases.
However, internet continues to remain barred in the entire Valley except for some government offices, hospitals and business establishments. Pre-paid mobile services too are yet to be restored in Kashmir.
-- PTI
« Back to LIVE