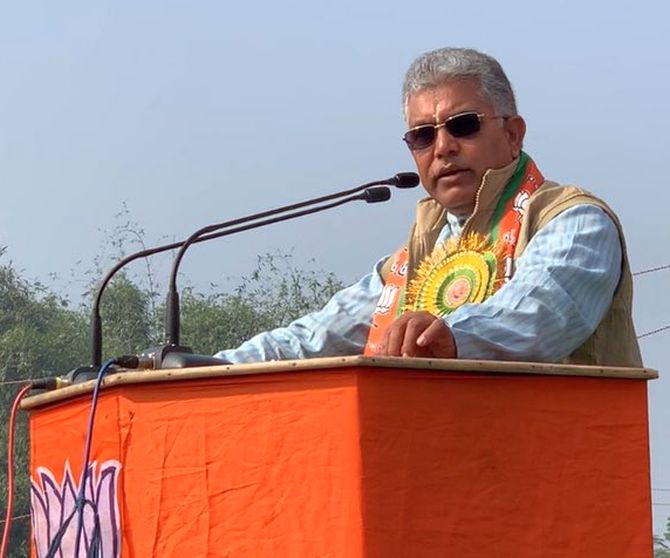 The Trinamool Congress has lodged two police complaints against West Bengal Bharatiya Janata Party president Dilip Ghosh in Nadia and North 24 Parganas districts for his comments that anti-CAA protesters "were shot like dogs", police and TMC sources said on Tuesday.
Senior TMC leader and state food supplies minister Jyotipriyo Mullick said on Tuesday that party activists have lodged a police complaint against Ghosh for his controversial remark.
"The common people are living in fear. Some are apprehending that Dilip Ghosh might kill them or shoot them. So a police complaint has been filed at Habra police station in North 24 Parganas, which is being treated as a FIR," Mullick said.
The second police complaint has been filed by a TMC leader in Ranaghat area of Nadia district.
"We have received the complaint. We are looking into it," Nadia district police said.
Ghosh has kicked up a row with his remark at a public meeting in Nadia district on Sunday that "anti-CAA protesters were shot like dogs in BJP-ruled states", provoking criticism from political rivals as well as his own partymen. -- PTI
« Back to LIVE