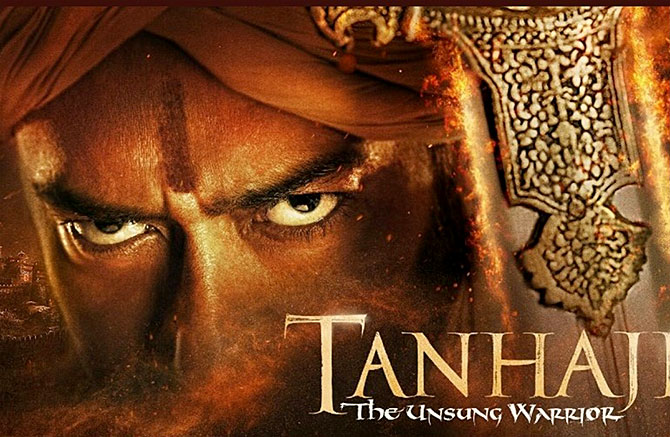 Bollywood star Ajay Devgn on Friday said that he wants Deepika Padukone's Chhapaak and his own film Tanhaji: The Unsung Warrior to do well commercially.
Both the films released on Friday and are locked in a battle for box office dominance.
Ajay's Tanhaji is based on the life of Tanhaji Malusare, the military leader of Maratha king Chhatrapati Shivaji Maharaj's army.
While Deepika's Chhapaak, directed by Meghna Gulzar, presents the story of acid attack survivor and activist Laxmi Agarwal.
Deepika's film, however, has been facing the wrath of certain section of people after she visited Jawaharlal Nehru University to express solidarity with the students, who were attacked by a mob on January 5.
Soon after her visit, hashtag #boycottchhapaak started trending on Twitter and several people asked the audience to watch "Tanhaji".
When asked about the Twitter war between both the films, Ajay said, "Who is doing the war? I don't think there is any war. People put their opinion and we should not take it seriously. Both films have good subjects and I hope both the films do well."
The actor was talking on the sidelines of a special screening of Tanhajifor school children.
Ajay's co-actor Sharad Kelkar, who played the role of Chhatrapati Shivaji Maharaj, accompanied him at the event.
"I am very happy with the response. Media has seen it and they have loved it, hopefully, everyone will love it," Ajay said.
"Apart from this (technology), this kind of story, on this scale and technology has not been made, the emotion, the drama, the action has worked as per the media," he added. -- PTI
« Back to LIVE