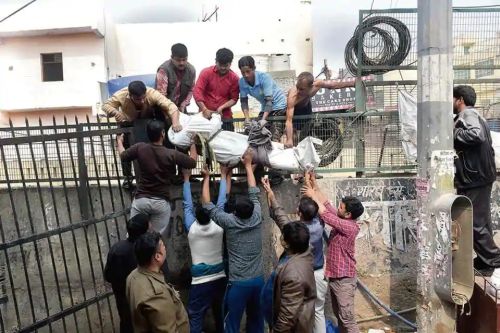 Aam Aadmi Party councilor Tahir Hussain on Thursday denied the allegations leveled against him in connection with the killing of Intelligence Bureau officer Ankit Sharma during the violence, which rocked north-east Delhi for many days.Denying his involvement in the act, he has sought a thorough probe.
"I am very sad to hear about the death of IB officer Ankit Sharma. He should get justice. I am not involved in this incident. There should be a thorough investigation into this," Hussain told ANI.
"I worked to stop the violence. I am innocent. I stopped the people from climbing up my building. On February 24, police conducted a search in my building and moved us out from there. Later, we shifted to a safe location. Till 4 pm on February 25, police were present in the building," he said.
Sharma's body was recovered from a drain in Chand Bagh area on Wednesday.He said the Delhi Police were present in the building after he requested the police force for the help.
"I requested the police to be present in the area as my building was being targeted and could be used for wrongful purposes. The Delhi Police personnel were present in the building. Only they can tell what exactly happened. I will fully cooperate with the police," said Hussain.
The AAP has said that anyone found guilty of being involved in the Delhi riots should be punished irrespective of the party or the religion he belongs to.
"From the very first day, AAP has been saying that any person, be it from any party or religion, action must be taken against them if found guilty," party leader Sanjay Singh told ANI.
Yesterday, family members of Ankit Sharma had alleged that a few people, who were pelting stones from the building of Tahir Hussain in Chand Bagh, killed him.
Ankit's father Ravinder Kumar has stated that his son was attacked while returning from his duty.
Image: People retrieve the body of 26-year-old Ankit Sharma, an IB staffer, from a riot-affected area in north-east Delhi, on Wednesday.
Photo: PTI
« Back to LIVE