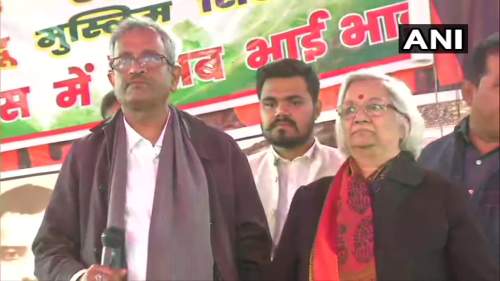 Shaheen Bagh interlocutors Sanjay Hegde and Sadhana Ramachandran reach the protest site in Delhi. The mediators were appointed by the Supreme Court while hearing a plea against a road blockade, the result of anti-CAA protests at Delhi's Shaheen Bagh.
A two-judge bench of the apex court comprising Justices Sanjay Kishan Kaul and KM Joseph on Monday appointed senior advocates Hegde and Ramachandran to mediate with the demonstrators and persuade them to move the protest elsewhere. The court also suggested that the advocates seek help from former information commissioner and IAS officer Wajahat Habibullah.
Protesters at Shaheen Bagh, however, had varied opinions about the interlocutors' visit. While some respected the court's decision, others were skeptical that the discussion would be limited to the issue of clearing the road and not the purpose behind the protest.
« Back to LIVE