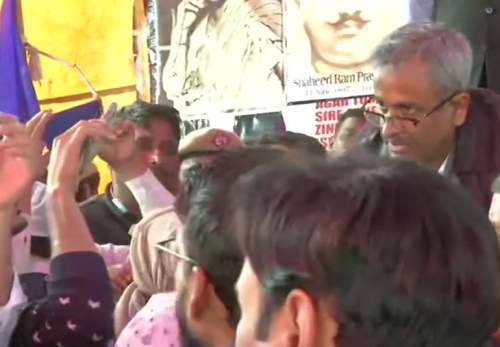 Advocates Sanjay Hegde and Sadhana Ramachandran, the mediators appointed by the Supreme Court speak to the protesters at Shaheen Bagh. Sadhana Ramachandran tells them that the Supreme Court has said that they have the right to protest.
"The law (CAA) has been challenged in the Supreme Court. But like us, others too have their rights, like right to use roads, open their shops. And the protests were hampering those rights.
As the two mediators took to the makeshift stage, the protesters welcomed them with a huge round of applause. The advocates began speaking to them, telling them to consider moving to an alternative place so that people are not inconvenienced. Roads in the area are blocked because of the sit-in which is on its 67th day today. The mediators said they are not here to listen to the reason for the protests but to suggest that they relocate. The mediators also told the media to stop filming and allow the talks with the protesters to continue with a certain amount of privacy.
The Shaheen Bagh area of Delhi had lately gained nationwide attention due to a continued anti-CAA sit-in by people, especially Muslim women against the Citizenship Amendment Act (CAA), National Population Register and National Register of Citizens.
The PIL, filed by Nand Kishore Garg and Amit Sahni through their lawyer Shashank Deo Sudhi earlier last week, sought appropriate directions to the Centre and others for removal of protestors from Shaheen Bagh near Kalindi Kunj.
Image: SC advocate Sanjay Hegde listens carefully to a protester at Shaheen Bagh
« Back to LIVE