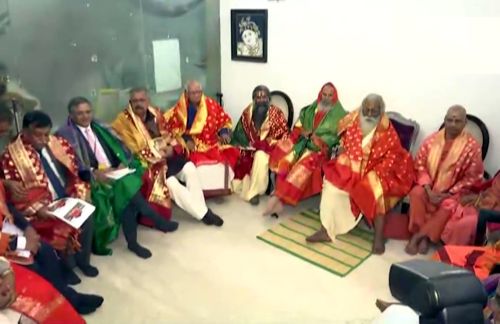 Mahant Nritya Gopal Das was elected president and Champat Rai general secretary of the Ram Temple trust at its first meeting in New Delhi on Wednesday.
The meeting, held at the residence of senior lawyer K Parasaran, also elected Prime Minister Narendra Modi's former principal secretary Nripendra Misra as the head of the temple construction committee of the Shri Ram Janmabhoomi Tirth Kshetra Trust.
The meeting was aimed at working out modalities to speed up the construction of the Ram temple in Ayodhya. It was also decided to open an account in Ayodhya's State Bank of India branch for donations for the Ram temple construction, Chanmpat Rai told reporters after the meeting.
Swami Govind Dev Giri of Pune was appointed as treasurer of the trust at the meeting.
Among those present at the meeting were the central government representative, additional secretary in Home ministry Gyanesh Kumar, UP government's representative Avinash Awasthy and Ayodhya District Magistrate Anuj Kumar Jha.
The Trust was constituted by the Narendra Modi government.
Modi had announced the formation of the 15-member trust in Parliament on February 5. The Shri Ram Janmabhoomi Teertha Kshetra Trust has seven members, five nominated members and three trustees. The trust was formed in adherence to the Supreme Court verdict on the Ayodhya dispute in November last year.
Senior lawyer Parasaran was named as the head of the Trust and its other members include Jagatguru Shankracharya, Jyothishpeethadheeshwar Swami Vasudevanand Saraswati Ji Maharaj from Allahabad, Jagatguru Madhavacharya Swami Vishwa Prasannatheerth Ji Maharaj, Pejawar Math in Udupi, Yugpurush Paramanand Ji Maharaj from Haridwar, Swami Govinddev Giri Ji Maharaj from Pune and Vimlendra Mohan Pratap Mishra from Ayodhya. -- PTI
« Back to LIVE