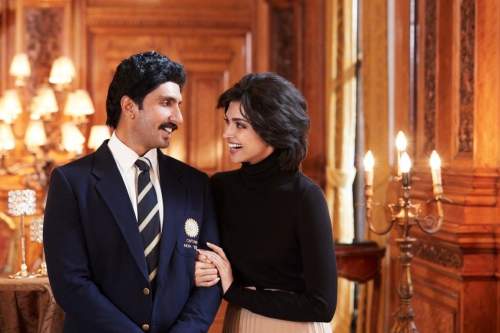 Actor Deepika Padukone on Wednesday shared her first look as Romi Dev, wife of legendary cricketer Kapil Dev, from the upcoming film "'83". In the photo, which Deepika shared on social media, she is seen sporting a bob and flaunting a black polo-neck top with cream bottom.
Also in the picture is actor Ranveer Singh, who plays Kapil Dev in the sports drama, in the official Team India blazer. Deepika said, for her, "'83" is an ode to every woman who prioritises her husband's dreams over hers.
"To be able to play a small part in a film that captures one of the most iconic moments in sporting history has been an absolute honour. "I've seen very closely the role a wife plays in the success of her husband's professional and personal aspirations in my mother and ''83' for me in many ways is an ode to every woman who puts her husband's dream before her own," the actor wrote on Instagram.
Ranveer too shared the same photograph on Instagram and wrote, "The wind beneath my wings. The heart of the hurricane."
83, directed by Kabir Khan, will chronicle India's win under Kapil Dev's captainship, when the Men in Blue defeated West Indies in the final to clinch their first-ever World Cup trophy in 1983. It is produced by Madhu Mantena, Vishnu Induri and Kabir Khan, and presented by Reliance Entertainment. The film is slated to be released on April 10. -- PTI
« Back to LIVE