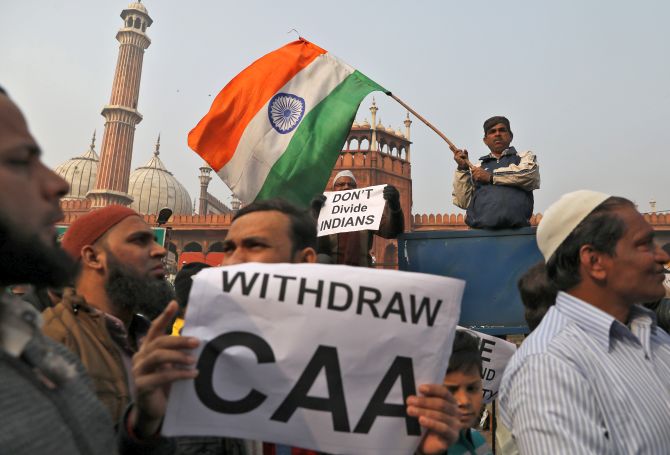 The Citizenship Amendment Act will in no way affect Muslims living in the country and it has been brought in to correct the "betrayal" of those religious minorities who had stayed back in the three neighbouring countries on India's assurance, Bharatiya Janata Party MP Subramanian Swamy said on Wednesday.
Delivering a talk on 'The Citizenship (Amendment) Act, 2019: A Historical Imperative beyond Contemporary Politics' at the University of Hyderabad, Swamy cited "disinformation" on the CAA and said he had invited opposition Congress leaders for a public debate on the matter.
"I challenge Congress men to debate with me. The points they are making (against the law) on television are all rubbish," he said, adding, "For those Indian Muslims living in India as Indian citizens, there is no power that Parliament can exercise to remove their citizenship...they are not under threat."
"CAA is an Act to correct our betrayal of those Hindus, Christians, Sikhs, Buddhists and Parsis who on assurance stayed back (in those countries). The BJP government kept that promise. How can you find fault with us for keeping a promise which was made by Mahatma Gandhi and several leaders afterwards," Swamy said.
Under the new citizenship law, members of Hindu, Sikh, Buddhist, Jain, Parsi and Christian communities who have come from Pakistan, Bangladesh and Afghanistan till December 31, 2014, and facing religious persecution there will not be treated as illegal immigrants, and be given Indian citizenship.
There have been protests against the law, which many believed to be targeted against Muslims, in various parts of the country.
On the ongoing protests against the law, Swamy said, "Where is this question of anti-Muslim bill. They have not read it. I don't know what the protest is about."
On the anti-CAA protest at Delhi's Shaheen Bagh, the BJP leader said, "The government has been very patient. I would have lifted them to Tughlakabad."
As Swamy delivered his speech, a group of students under the banner of SFI-Hyderabad Central University staged a protest at the venue and showed placards with the messages -- "No CAA, No NRC and No NPR" and "Go Back Subramanian Swamy".
Soon, another group of students raised slogans "We support CAA" and "Gaddarao Bharat Chhodo" (traitors leave India) even as Swamy continued his address. -- PTI
« Back to LIVE